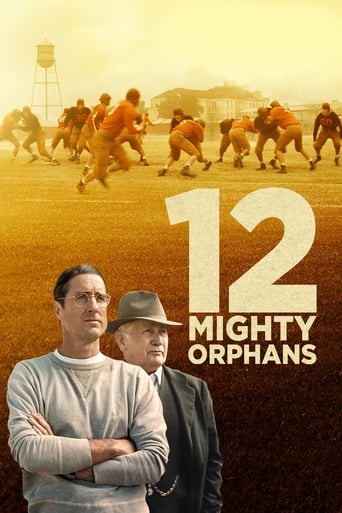 12 Mighty Orphans 2021 DVD Cover. Haunted by his mysterious past, a devoted high school football coach leads a scrawny team of orphans to the state championship during the Great Depression and inspires a broken nation along the way.

12 MIGHTY ORPHANS is based on the actual tale of the Mighty Mites, a Fort Worth orphanage football team that went from playing without shoes—or even a football—to winning Texas state titles during the Great Depression.

During their victorious season, these underdogs and their unwavering spirit were an example to their community, state, and a nation in need of a comeback, even attracting President Franklin D. Roosevelt’s attention. Rusty Russell, a famous high school coach who stunned his peers by resigning from a prestigious post to teach and coach at an orphanage, was the driving force behind their success.

Rusty’s secret was that he was an orphan himself. Rusty created new methods that would come to define modern football after seeing that his skinny guys couldn’t beat the other teams with strength.