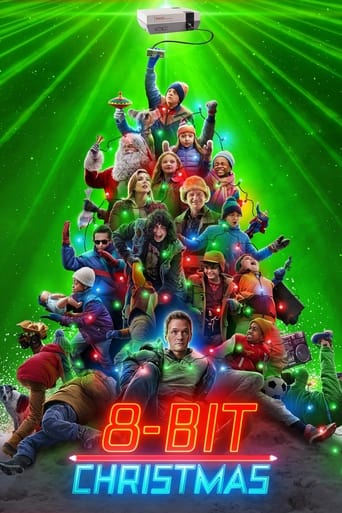 8-Bit Christmas 2021 DVD Cover. In suburban Chicago during the late 1980s, ten-year-old Jake Doyle embarks on a herculean quest to get the latest and greatest video game system for Christmas.

In 8-BIT CHRISTMAS, 11-year-old Jake Doyle (Winslow Fegley), like all his mates in the late-’80s Chicago suburbs, would do just about anything for a Nintendo — or so grown-up Jake (Neil Patrick Harris) explains it to his daughter. The single affluent kid in the neighborhood who has a Nintendo gets to pick and choose from the elementary throng that gathers outside his house every weekend for a crack at playing in his ultra-cool basement.

But Jake’s working-class parents (June Diane Raphael and Steve Zahn) aren’t about to splurge on a console, especially as the PTA starts preaching against the hazards of video games for youngsters. When a Scout drive offers a Nintendo as a first prize, Jake and his buddies all join in on the fun. They’ll do just about everything to get a Nintendo in time for Christmas.