A Day to Die 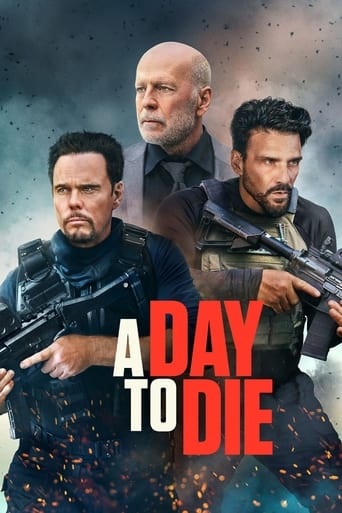 A Day to Die 2022 DVD Cover. A disgraced parole officer is indebted to a local gang leader and forced to pull off a series of dangerous drug heists within twelve hours in order to pay the $2 million dollars he owes, rescue his kidnapped pregnant wife, and settle a score with the city’s corrupt police chief, who is working with the gang leader and double-crossed him years ago.

Ex-military ops officer Conner Connolly (Kevin Dillon) has one day to pay $2 million in reparations to a local gang leader in order to save his kidnapped wife.

With her life on the line, Conner must recruit his old crew, led by Brice Mason (Frank Grillo), to pull off a series of dangerous heists to repay the money he owes and settle a score with the city’s corrupt police chief (Bruce Willis).

In a race against time, the crew must rely on their tactical training and brotherhood to save themselves and those who matter most.