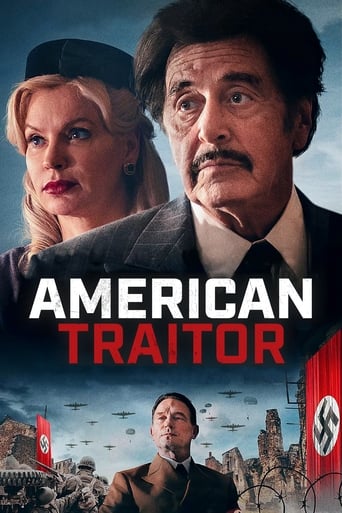 American Traitor The Trial of Axis Sally 2021 DVD Cover. Mildred Gillars, an American woman, and her lawyer, who is trying to clear her name. Mildred’s story exposes the dark underbelly of the Third Reich’s hate-filled propaganda machine, her eventual capture in Berlin, and subsequent trial for treason against the United States after the war. She was dubbed “Axis Sally” for broadcasting Nazi propaganda to American troops during World War II.

Mildred Gillars was born and educated in the United States of America. After dropping out of Ohio Wesleyan University to pursue her dream of being famous, Gillars traveled to Europe in pursuit of recognition.

Mildred Gillars obtained a position as an announcer with the German State Radio in Berlin in 1940, and her voice enchanted the listeners, and she became the face of Nazi German propaganda throughout World War II.

Gillars, dubbed “Axis Sally,” was arrested on March 15, 1946, indicted on September 10, 1948, and charged by the US government with ten counts of treason. James J. Laughlin, an eccentric but charming lawyer, elevated the case of Mildred Gillars, America’s most loathed person, to the level of Adolf Hitler himself, eliciting significant unfavorable emotions.