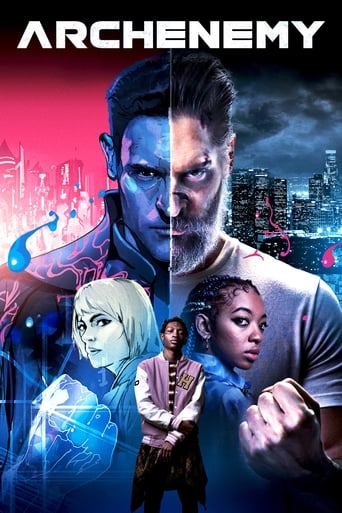 Archenemy 2020 DVD Cover. Max Fist is a hero from another dimension who has somehow landed on Earth and been stripped of his powers.

Joe Manganiello’s character, Max Fist, is a local drunk who claims to be a superhero from the planet Chromium.

He claims to have been drawn into a wormhole, slipping through time and space, and being lowered to Earth without any of his abilities.

Except for a teenager named Hamster (Skylan Brooks), who can’t get enough of Max’s stories, no one pays attention to Max.

When Hamster and his sister (Zolee Griggs) run afoul of a brutal drug cartel headed by The Boss (Glenn Howerton), Max takes to the streets as a ruthless vigilante hell-bent on proving himself to be the hero no one believes he is.

Is Archenemy available for streaming?

Yes, on Hoopla and Spectrum On Demand

Is Archenemy available for buy?