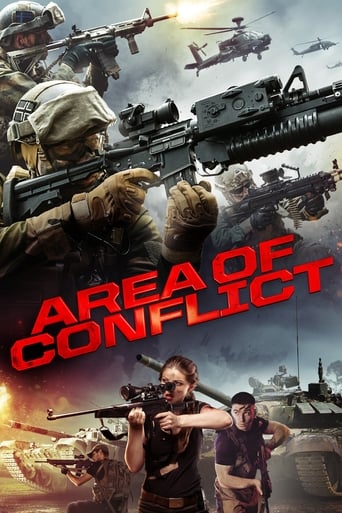 Area of Conflict 2020 DVD Cover. Human traffickers wipe out a young girl’s family and village. She then seeks revenge on those responsible, eventually becoming first the hunted then turning into the hunters with the mercenary hired to eliminate her.

Roger appears to have grown tired of the mercenary lifestyle and now enjoys wine, women, and relaxation. He and his devoted crew of hired guns, on the other hand, find themselves stalking through the forests of Eastern Europe in search of a group of assassins pursuing “vital national objectives,” as they’ve been instructed.

They quickly realize they’ve met their match as one by one they are injured or killed, and they find themselves the hunted rather than the hunters. When Roger finally cornered the “team” hunting them, he discovered that it was just one woman, a stunning sharpshooter named Sdanka, who was out for vengeance.

He quickly discovers that she is far superior to him in the art of battle. They’ve banded together to take on an army of rogue soldiers and renegade agents who have no backup. They both quickly learn that your enemies aren’t always your enemy, and your friends might be your enemies as well.