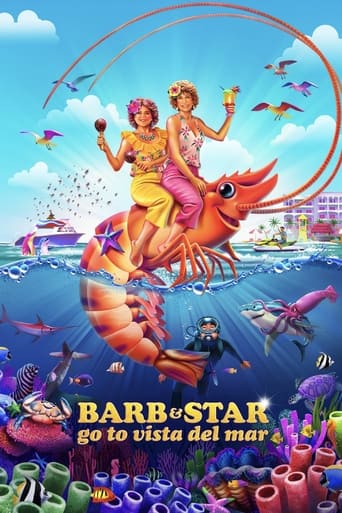 Barb and Star Go to Vista Del Mar 2021 DVD Cover. The story of best friends Barb and Star, who leave their small midwestern town for the first time to go on vacation in Vista Del Mar, Florida, where they soon find themselves tangled up in adventure, love, and a villain’s evil plot to kill everyone in town.

“Barb and Star Go to Vista Del Mar 2021 DVD Cover” stars Wiig and Mumolo as best friends Star (Wiig) and Barb (Mumolo), two sweet Nebraska ladies who live together after their marriages end. They plan to take their first trip together. They pack their curlers and culottes and head to a resort town named Vista Del Mar in Florida, innocent and wide-eyed with childish delight.

(Culottes play an important role in the movie.) They meet Edgar Pagét (Jamie Dornan), the hottie sitting next to them at the pub, and fall in insta-love/lust with him. Edgar, on the other hand, is not who he claims to be. He’s in Vista Del Mar on the orders of his boss and (hopefully) mother, an evil spider-woman who lives in a high-tech underground lair and fantasizes about wiping Vista Del Mar off the map with a swarm of deadly mosquitoes.

As Barb and Star try to liven up their lives, Sharon Gordon Fisherman (also played by Wiig), a creepy, pale-faced mastermind in a secret lair, plans the destruction of Vista del Mar with a massive army of trained killer mosquitoes. (It’s all payback for a childhood humiliation that involved her being fired from a cannon into the pool of a distant Disney cruise ship, in typical byzantine fashion.)

She sends her henchman Edgar (Jamie Dornan) to Vista del Mar to help her carry out her intricate scheme, where he meets Barb and Star at a pub. The three are soon sharing a large, drug-laced drink and waking up in the same room.

The presence of hunky Edgar threatens to divide Barb and Star, as they both have feelings for him, but our heroes are far too polite and trustworthy to ever admit it. Instead, they politely sneak behind each other’s backs and make a variety of absurd reasons for their whereabouts. One of the better ones is “I went to a turtle’s home.” Meanwhile, Edgar messes up so badly that Sharon is forced to send another agent to clean up his mess. Damon Wayans Jr., who plays the agent, is even more incompetent.

It’s a film that’s clearly conscious of its own deranged silliness, unashamedly transplanting kids movie plotting to a film targeted at adults, and it would have made a nice, if modest, splash last summer if cinemas hadn’t been closed. It’s not quite as well-suited to a cold February evening without an energetic audience, and its shortcomings are more visible, the most obvious of which is that Barb and Star aren’t quite as hysterically funny as Wiig and Mumolo seem to believe they are.

They might have been if their antics had been condensed into random SNL skits, but there’s barely enough here for the first act, let alone an almost two-hour film.

Is Barb and Star Go to Vista Del Mar available for buying?

Is Barb and Star Go to Vista Del Mar available for download or rent?