Battle in Space The Armada Attacks 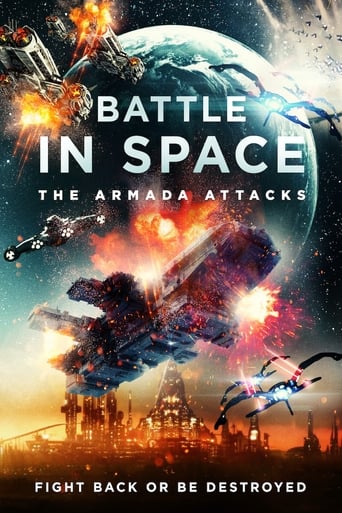 Battle in Space The Armada Attacks 2021 DVD Cover. In 2420, after aliens and powerful space wizards enslaved human villages, a group of rebels organize a counter attack against their alien overlords by piloting fully loaded spaceships.

While it can seem to be an excessive number of cooks in the kitchen, fear not: it is an anthology of only sporadic connections.

And it is the film’s first flaw. Since the authors struggle to adequately intertwine the different stories, there is no forward movement, and plot beats seem to be added or interrupted suddenly. But can this 1980s tribute to Roger Corman’s work (think Fight Beyond The Stars) transcend this and be entertaining?

Each story follows a rebel, or a group of rebels, as they fight interdimensional aliens who used space wizards to rule the universe.

The Armada Attacks follows Jack (Andrew Troy), a former cop turned con artist recruited by a desperate father to locate his son. The best characterizations and world-building can be found in this entry.

Troy is a natural in front of the camera and gives one of the best performances of the whole production, adding empathy to a bleak landscape.

The Hermes is the next episode, and it follows Jaymee (Ryan McCormick) and Adrian (Toby Rawal) as they look for a certain object on a globe.

Of course, things aren’t really as simple as they seem. This is where the filmmakers’ meager finances really come through in a negative way. McCormick is stiff, as though he had just finished reading the script when shooting started.

In addition, part of the climax takes place in what seems to be a mattress store’s backroom. There were no efforts to light it in an interesting way to conceal what it is. This brings you out of the movie, and I have no idea what they were searching for or why they were looking for it.

A spacecraft captain, James (Dylan Watson), and his co-pilot, Lewis (Wayne Wilson), are traversing the stars in The Agamemnon when the captain is taken over by an alien species. This story nicely establishes the future by demonstrating how and why the aliens (whose names I don’t recall) so effortlessly defeated the human race. However, it seems as though they didn’t have enough time to conclude the story properly.

Mo (Jess Gabor) and John (Tom Madden) are alone on a submarine in The Perses, struggling for their lives while a separate starship pursues them. But that’s not all they’re up against; one of them is deceiving the other, threatening to lead them into grave risk. The Perses is tense because Gabor and Madden play off each other well while still holding their guard up just enough for the viewer to not infer the truth so quickly.

Debbie (Mia Lardner) is introduced in The Caronte, who is attempting to reach her family through a video game that her younger brother used to enjoy years before.

While the editing of present and past is excellent, Battle In Space suffers as a result of the lack of emphasis on the universe as it is today. Lardner is sweet, and she has a good chemistry with her on-screen brother Nicholas, played by her brother Oliver Lardner. Furthermore, the conclusion is simply brilliant.