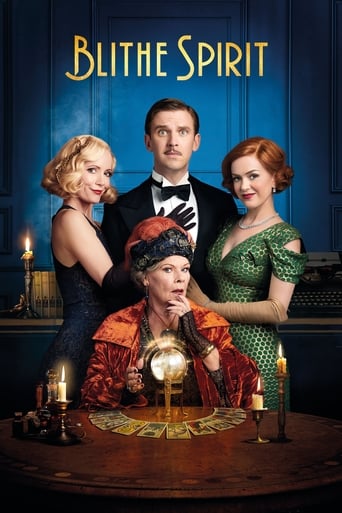 His picture-perfect new wife Ruth (Isla Fisher) is doing her best to keep him focused so they can fulfill her dream of leaving London for Hollywood.

Charles’ quest for inspiration leads him to invite the eccentric mystic Madame Acarti (Judi Dench) to perform a séance in his home. You can see the download button for Blithe Spirit 2021 DVD Cover.

He gets more than he bargained for when Madame Acarti inadvertently summons the spirit of his first wife: the brilliant and fiery Elvira (Leslie Mann).

Ready to pick up her life right where she left off, Elvira is shocked to discover the prim and proper Ruth is now married to her husband and running her household.

Charles finds himself stuck between his two wives and their increasingly over-the-top attempts to outdo one another in this lethally hilarious comedy.

A good-natured and endearingly overstated comedy that thrives in its absurdity. Blithe Spirit 2021 DVD Cover is Based on a Noel Coward play, Blithe Spirit is full of the playful spirit of the great writer, and is quintessentially British too. The outfits, the dialogue, and even Charles Condomine’s mustache, are all over-the-top, but this is a film very much played for laughs. There’s an artistic license here to be as bombastic and unsubtle as possible, and the actors are clearly having fun playing in this mischievous tone.

The casting is spot on, as both Fisher and Mann play roles of this nature so well, while it’s always a pleasure to see Dench on our screens. The movie does rely, primarily, on its one central joke, which is Charles addressing his dead wife, Elvira, only for others around him to believe he’s talking to them. In truth, the gag is over-used to the point of tedium. But despite this grievance, director Edward Hall still manages to deliver an easily accessible, fun little movie that more than passes the time.