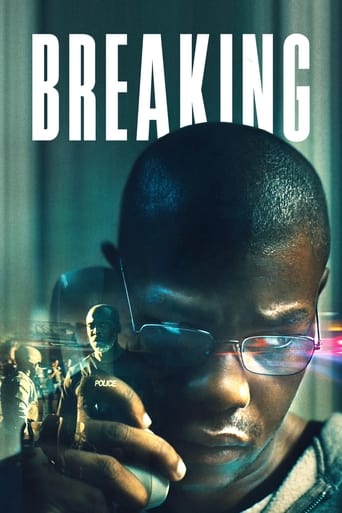 Breaking 2022 DVD Cover. A Marine war veteran faces mental and emotional challenges when he tries to reintegrate back into civilian life.

Director Abi Damaris Corbin’s fact-based drama BREAKING is the heartbreaking story of Brian Brown-Easley (John Boyega), a veteran U.S. Marine who holds up a Wells Fargo bank in Marietta, Georgia, by informing the bank teller that he has a bomb.

But Brian, the separated father of a young daughter, isn’t interested in taking cash from the branch’s vaults. What he wants is media attention so that the Department of Veterans Affairs will be forced to give him the $892 in benefits that he’s owed.

Brian lets everyone in the bank go except managers Rosa (Selenis Leyva) and Estel (Nicole Beharie), whom he instructs to call 911 and demand a negotiator. Officer Bernard (Michael Kenneth Williams) eventually makes contact, lets Brian tell his story, and tries to end the hostage situation without further violence.