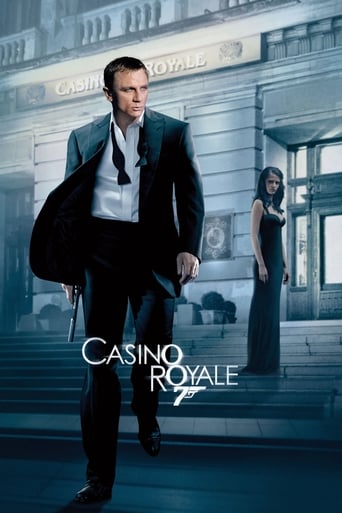 Casino Royale 2006 DVD cover. The James Bond franchise is one that has reeled in viewers for decades with exciting car chases, thrilling poker scenes, and an entire list of evil villains attempting to destroy secret missions. Since the first premiere all the way back in 1962 with the legendary Dr. No, a total of eight different actors have portrayed the handsome British spy on the big screen.

However, it wasn’t until the 2006 Bond film, Casino Royale, that the series really catapulted in terms of popularity. Daniel Craig made his first appearance as the famous character, and audiences were extremely receptive, selling out the box office in record numbers. Today it remains one of the top-grossing Bond pictures in history and it isn’t hard to see why. Between the gripping action scenes that leave viewers on the edge of their seats to the many visually stunning film locales, it may be the best edition of the series.

Nowadays viewers have the chance to purchase the masterpiece on DVD in various editions from remastered to collector’s. Let’s take a trip down memory lane, remembering Craig’s knockout performance as the elusive British spy.

Not unlike other films in the franchise, Casino Royale presents a difficult task for Bond to accomplish, as he experiences a host of challenges and various run-ins on his way to complete the mission. But Casino Royale is special in that it’s Daniel Craig’s first job, and it isn’t an easy one. The spy is tasked with taking down notorious banker and skilled poker genius Le Chiffre, eliminating potential future danger for citizens.

Once word gets out that the evil character plans to finance another one of his dangerous schemes with the money gained in a high-stakes game of poker, the wise agent decides he will play against Le Chiffre in order to hault the flow of deviant funds. Equipped with a license to kill and his own set of masterful strategic knowledge, Bond demonstrates his elite mathematical acumen and ultimately wins over $120 million in one of the best, most stylish poker scenes in mainstream movie history. His evil opponent is left stunned and utterly defeated, forced to retreat under the mighty hand of none other than Bond, James Bond.

Each of the film’s scenes are engrossing and extremely entertaining, as Craig manages to perfectly capture the iconic character even for the very first time. Since this premier, the actor has played the spy in over five other productions with a highly anticipated new release, No Time to Die, set to hit theatres as soon as September of this year. The film will feature Craig on an entirely fresh secret mission to rescue a scientist that has been recently kidnapped by an unknown villain. One thing’s for certain: the star has undoubtedly secured his place as the confident face of 007.

The Casino Royale 2006 DVD cover features the British spy front and center, donning his classic black and white tux, looking as sharp as ever. Next to him, one of the most famous and recognizable Bond cars, the luxurious Aston Martin DB5 is displayed in its full glory. With a grey background and 007 lettering, fans will swoon over this cover art, eagerly adding it to their collection.

There are many versions of this 2006 film for DVD including a two-disc widescreen edition, a remastered edition and a collector’s edition. There’s even a version specifically for Blu-ray owners, so that they too can enjoy the on-screen action of one of Bond’s most successful adventures. In addition to DVD, nowadays fans of the series can also view Casino Royale on Netflix, Google Play, and Amazon Prime.