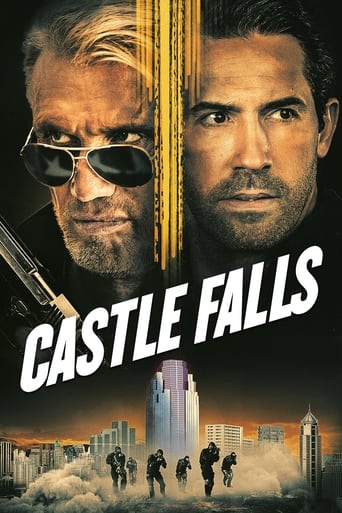 Castle Falls 2021 DVD Cover. Rival gangs seek out millions of dollars hidden inside a luxury condominium that’s scheduled to be demolished, but first, they have to deal with the demolition prep crewman who found the loot first.

After decades of negligence, the castle Highland Hospital, a symbol of the city’s isolation, has been filled with explosives and is ready to be dismantled at any time. No one knows that a gang leader who is now in jail hid the $3 million in cash he stole from his opponent in an abandoned building.

Now, three desperate parties want money-a blue-collar ex-soldier (Adkins) discovered the money while working as a member of a demolition team, and a prison guard (Lundgren) was willing to help his daughter with cancer treatment pays no price and a cruel and ruthless person. Gangs claiming to be legal owners. The demolition cost has been set, everyone is evacuated, and the castle will collapse in 90 minutes. The clock is ticking. Who will find cash and: Will they go out alive?