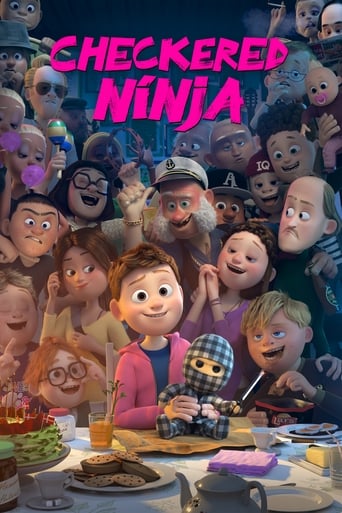 Checkered Ninja 2018 DVD Cover. A possessed Ninja doll teams up with a teenage boy to avenge the murder of a poor child factory worker.

Aske is an average boy in seventh grade who just wants a peaceful life without being bothered by obstacles he faces daily. He has a crush on a girl named Jessica, who is one grade above him. His nerdy best friend is Odysseus and is being bullied by a boy who attends a special ed class named Glenn.

Aske has a strained relationship with his stepfather Jørn and stepbrother Sune. Aske’s life turns upside down one day when he gets a ninja doll as a gift for his 13th birthday from Uncle Stewart, who was on a vacation in Thailand earlier. He soon finds out that the ninja doll was possessed by a spirit belonging to a Japanese samurai named Taiko Nakamura who committed ritual suicide (seppuku) to save humanity from evil.

The doll teams up with Aske to avenge the death of a Danish businessman named Phillip Eberfrø, who beat a poor boy to death in a sweatshop in Thailand. This puts Aske and his new friendship with this doll to the test, getting themselves ready for an adventure Aske never has been on before.