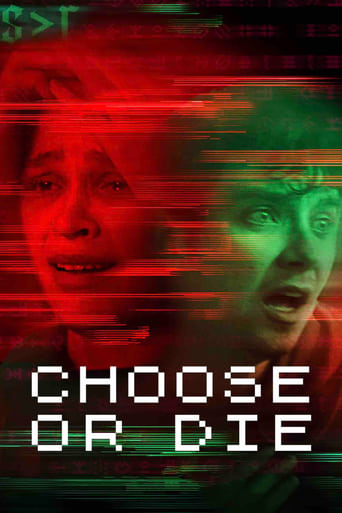 Choose or Die 2022 DVD Cover. In pursuit of an unclaimed $125,000 prize, a broke college dropout decides to play an obscure, 1980s survival computer game. But the game curses her, and she’s faced with dangerous choices and reality-warping challenges. After a series of unexpectedly terrifying moments, she realizes she’s no longer playing for the money but for her life.

Kayla’s friend Isaac (Sex Education’s Asa Butterfield) has a crush on her and teaches her code in exchange for old gadgets and tech doodah that he loves. Coming across CURS>R, Kayla is told by the game that she can win $125,000 if she beats the game, which will be a lot of help to her and her family.

But is she playing the game or the game is playing her? As the game is wont to, it begins to interfere with reality. While playing in a cafe, she witnesses a waitress eating broken glass until she dies, while repeatedly saying she is unable to stop. Layla looks horrified, an expression one will tire of before the end.