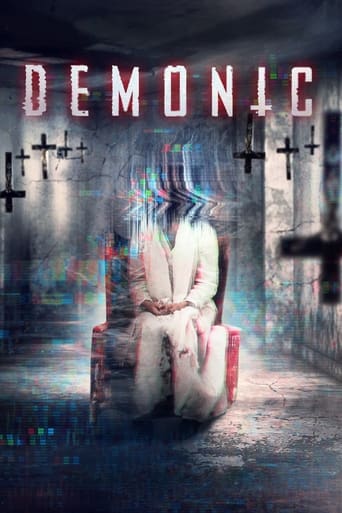 Demonic 2021 DVD Cover. A young woman unleashes terrifying demons when supernatural forces at the root of a decades-old rift between mother and daughter are ruthlessly revealed.

In DEMONIC, Carly (Carly Pope) is having nightmares about her mother, who’s in prison for multiple murders. An old, estranged friend, Martin (Chris William Martin), visits her and explains that he briefly took part in a medical experiment at a facility called Therapol and saw Carly’s mother there in a coma.

Further, the doctors in charge want to see Carly. Carly reluctantly shows up, and chief physician Michael (Michael J. Rogers) and neuroscientist Daniel (Terry Chen) strap her into a machine that will project her into a digital version of her mother’s subconscious. Carly uses the opportunity to tell her mother off, but, to her surprise, she receives a warning. It wasn’t her mother who summoned her, but something far, far worse.