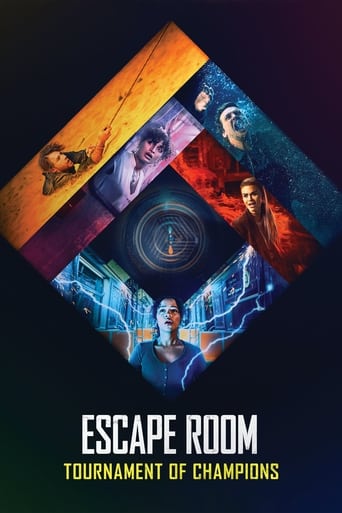 Escape Room Tournament of Champions 2021 DVD Cover. Six people unwittingly find themselves locked in another series of escape rooms, slowly uncovering what they have in common to survive as they discover all the games that they’ve played before.

Following their escape from Minos’ “single survivor” escape rooms, Zoey and Ben resolve to face the secretive organization after discovering coordinates to their New York City headquarters in Minos’ emblem. Zoey’s therapist encourages her to move on and ride a plane to overcome her phobia of flying, but she chooses to drive with Ben instead.

The two come see the headquarters in a state of disarray and are approached by a vagabond who takes Zoey’s jewelry. She and Ben are pursued and lured into a subway train car, where they are trapped. The train car detaches itself from the rest of the train and is rerouted to a distant station. Zoey, Ben, and other passengers Rachel, Brianna, Nathan, and Theo are trapped inside the train. Minos reveals themself to be pulling the strings once more, as the train electrifies, transforming it into another another escape room. The others are survivors of past Minos escape rooms, Zoey and Ben learn.

The surviving go to the next chamber, which is a bank with a progressively closing fault and a lethal laser security system. Nathan has a faith crisis while deciphering a complicated way to avoid the lasers and knocks himself out, triggering the lasers. The party is successful in determining the path and escaping with Nathan. Zoey is confused by numerous allusions to someone named Sonya and the fact that the escape rooms have no relation to the group when in the room.

The following floor has a beach with a hut, lighthouse, and more Sonya allusions. The beach is found to be covered in quicksand as the party begins to solve problems. Nathan gives up his life to save Rachel and is suffocated by the sand. As Zoey solves the room’s riddle, she discovers a another way out of the chamber, just as Brianna unlocks the area’s intended exit. The gang has a disagreement, with Rachel and Ben side with Zoey. Brianna takes the main exit, while Rachel and Ben make their way through the quicksand to the other exit. Ben slips into the quicksand and appears to perish.

Zoey and Rachel are heartbroken by the deaths of their friends and resolve to bring Minos down. They escape into the city through a manhole, but they immediately discover they’re still in the game when they run across a terrified Brianna, who informs them that acid rain is being poured into the chamber on a regular basis.

The gang solves the room’s riddle and unlocks a cab to flee, but the cab locks Rachel and Brianna out after Zoey arrives. Rachel and Brianna are killed by the acid rain while Zoey falls into the next room. A journal from Sonya reveals the rooms are based on a great day out she had with her mother in the next room, a children’s bedroom. Amanda, Sonya’s mother, is shown to have survived her fall in the “single survivor” game and was forced to make space for Minos after they kidnapped Sonya.

Amanda enters the room and asks Zoey to take over as Minos’ next puzzle builder. Ben, who is confined in a cage, also emerges in the chamber. Zoey is adamant about not working for Minos. Ben’s cage fills up with water quickly, but Zoey and Amanda work together to get him out. They create a fire in the escape chamber and manage to escape the institution by breaking out.

They inform the police, who recover Rachel, Brianna, Nathan, and Theo’s bodies, and the news about Minos is made public. An FBI agent retrieves Zoey’s jewelry and tells her that Minos will be apprehended owing to Amanda’s testimony. Zoey decides to fly home with Ben, filled with confidence. Zoey begins to suspect that this is a set-up planned by Minos while on the plane. As another Escape Room on the plane begins, gas is sprayed into the cabin, and the Gamemaster mocks Zoey for falling into their trap.