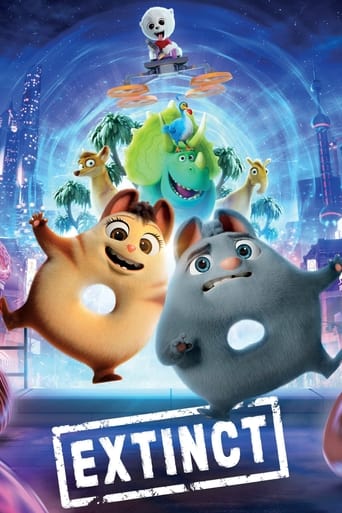 Extinct 2021 DVD Cover. Op and Ed, two cute donut-shaped animals known as flummels, time-travel from 1835 to modern-day Shanghai by mistake. They find traffic, trans fats, and, worst of all, the extinction of flummels. It’s up to this clumsy duo to preserve themselves and their species…and maybe even rewrite history.

OP (Rachel Bloom) and ED (Adam Devine) are sister and brother flummels who live on an island in the Galapagos in 1835. Ed, a gloomy pessimist, is trying to fit in with the community, but Op, who is excessively enthusiastic, continually causes chaos, making them outcasts. Op and Ed are expelled when Op’s rash actions jeopardize the preparations for the forthcoming Flower Festival.

Op, undeterred, guides Ed to the prohibited zone on the other side of the mountain in quest of flowers so beautiful that the flummels will have to allow them rejoin the celebration. There, much to Op and Ed’s surprise, they find a gigantic, enigmatic glowing flower that opens up and drags both Op and Ed inside it with a magical pulse. They fall through a brightly colored time vortex and emerge at a house in… modern-day Shanghai.

Op and Ed encounter CLARANCE (Ken Jeong), a beautiful little puppy, in Shanghai. Clarance attempts to explain where they are and when they will return, and he agrees to assist them. He brings them to a museum, where they find that flummels became extinct in 1835, just as they were falling into the time flower. Op and Ed understand they must travel back in time to 1835 in order to rescue their species.

Clarance presents Op and Ed another “time flower” that his late scientist owner, Dr. Chung, has been experimenting with. This transfers the group to Dr. Chung’s incredible Time Terminal, which exists outside of space and time. Hundreds of time flowers link there, each heading to a different historical moment. Unfortunately, Clarance is sent through a random portal by another Op and Ed mishap, and the small dog is lost in an unknown time and place.

Op and Ed, unsure of what to do, encounter “THE EXTINCTABLES,” a family of strange, extinct animals who dwell in the safety of the Time Terminal for all of eternity. Op and Ed, with their assistance, must first look for Clarance before returning to save the flummels. Despite their differences, they are able to locate Clarance in 1917 Antarctica, shackled to Ernest Shackleton’s sled dog team. They all make it back to the Time Terminal in one piece, but not without the triceratops Extinctable being injured.

Op’s haste nearly resulted in the death of the last dinosaur! Ed is enraged at his sister, and the two have a major spat. Recognizing her error, Op sets out on her own to return to her Galapagos habitat in 1835 and alert the other flummels about their impending extinction.

Op attempts to persuade the flummels in the Galapagos about what she’s gone through. She’s learned that they’re all in risk of being swallowed by the island volcano. When Op, Ed, and the rest discover the actual cause for flummels’ extinction, they are taken aback. All hope appears to be gone as our teeny-tiny flummel heroes attempt to save their whole species on their own.

Until the Extinctables arrive to save the day, the odds appear insurmountable. The Extinctables, along with Op, Ed, and the rest of the flummels, will now be annihilated, thus the odds are still overwhelming. Finally, we can only hope that Op and Ed grow up to be heroes, and that flummels continue to dwell among us now.