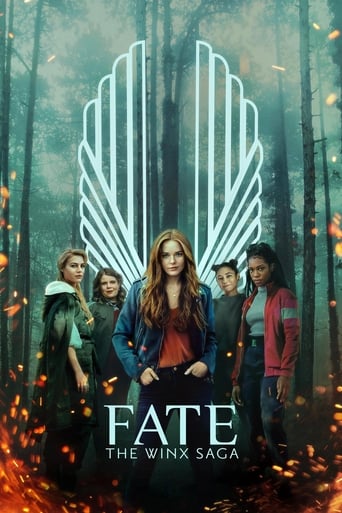 Fate: The Winx Saga Season 1 DVD Cover. The coming-of-age journey of five fairies attending Alfea, a magical boarding school in the Otherworld where they must learn to master their powers while navigating love, rivalries, and the monsters that threaten their very existence.

Bloom, a fire-breathing fairy, enrolls at Alfea College, a magical boarding school in the Otherworld. Stella (a light fairy), Aisha (a water fairy), Terra (an earth fairy), and Musa share a suite there (a mind fairy).

Bloom begins to learn more about her life with the aid of her four new friends. Meanwhile, the Burned Ones, ancient beings from the Otherworld, have returned to Alfea and pose a danger to all.

Bloom is played by Abigail Cowen, a 16-year-old fire fairy who was raised by human parents on Earth. She is Aisha’s roommate and a first-year student at Alfea. She comes to the realization that she is a changeling.