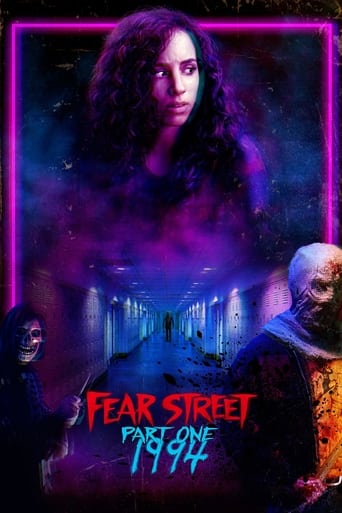 Fear Street Part One 1994 2021 DVD Cover. In 1994, a group of adolescents learns that the terrible incidents that have plagued their town for decades are all linked — and that they may be the next victims.

Part 1 of Fear Street: 1994 introduces the world of Shadyside, a run-down American town beset by drugs, poverty, and so many gory murders that it’s dubbed “Killer Capital USA.”

Every few years, a new spree murderer arises to murder their neighbors before committing suicide. Shadyside is said to be cursed by a one-handed witch named Sarah Fier, according to local mythology.

They think she still possesses the townsfolk to such horrible murderous ends 300 years after she was hung for her depravity.

Deena (Kiana Madeira) and her Shadyside High pals have more important worries, such as how to stick it to their rival Sunnyvale football team and how to cope with a recent break-up, even after some of their classmates are slain in a mall massacre.