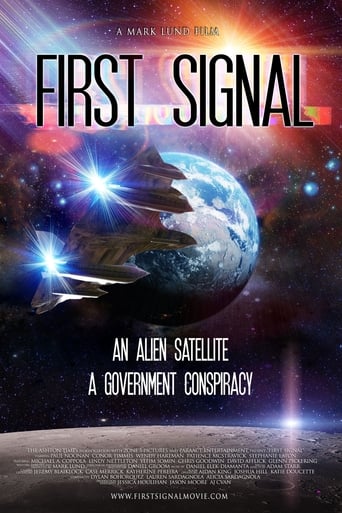 First Signal 2021 DVD Cover. When Air Force Space Command receives a signal from an alien satellite in Earth orbit an emergency meeting with the President reveals a government conspiracy.

A global crisis was on the horizon. With Russia’s annexation of Crimea, President Helen Colton arrived at the G-7 summit in Brussels, Belgium, facing an international crisis. But her National Security Advisor, Elisabeth Seward, told her that General John Reager, the Commander of Air Force Space Command, needed an urgent, unscheduled meeting.

​Reager is reviewing the slide presentation he is about to send to the leader of the free world with the help of Major Ellen Sampson of the Space and Missile Systems Center, while Colton and Seward secretly descend into a nearby bunker. But, just as Reager is advising Sampson on the complexities of Presidential diplomacy, Cedric Yonah enters their stoic world. Reager begins an interrogation, enraged by the presence of a civilian, but it is cut short when Colton appears and assumes charge of the situation.

​Awkward introductions portray Yonah as Colton’s science advisor. But Reager quickly clashes with the enigmatic Yonah, who seems to be neither present nor absent. Was it Yonah’s mid-thirties appearance, Nehru-styled suit, and open disrespect that irritated Reager, or was it Reager’s four-star uniform, which symbolized military strength and overconfidence, that threw Yonah off? Regardless, their clash of personality will have global ramifications in no time.

​With time running out, Colton tells Reager to get started on his presentation. Reager builds to the moment of discovery – an alien satellite is parked at LaGrange Point 2 – with military precision with each passing slide. The decoded signal shows both Earth orbiting satellites, military and civilian air traffic, and weather forecasting models, and was discovered when Sampson’s unit intercepted an alien signal from a military satellite. But the most shocking revelation was a flight schedule for an unknown aircraft.

​Colton’s efforts to learn more about it are met with a confrontation between Reager and Yonah, who are both defending their worlds. But what planet is Yonah trying to save? Yonah erupts into an impassioned appeal as an exasperated Reager orders Colton to sign a worldwide surveillance order to track down this alien presence, citing world history and the oppression of millions based on fear of the unknown. Reager dismisses Yonah as a pacifist after hearing the speech.

Colton reluctantly signs Project Troy, giving Reager nearly unrestricted tools and money to track down the alien invasion. Seward and Sampson are the ones who notice Yonah going blank as he relives the horrors and sounds of a war waged over seventy years ago—a war he was a part of.

​As the meeting ends, a dejected Yonah accepts a ride from an empathic Sampson to learn more about him, as per Reager’s previous order. Colton finds herself alone with Seward as Reager departs, and she tells her that she has been aware of an alien presence on Earth since taking office. Seward, shocked, follows Colton’s orders to enlist the help of two other world leaders to devise a strategy to stop Reager before he unwittingly starts a biblical-scale war.

​With Project Troy now in place, a jittery Yonah guides Sampson to a field rather than an airfield. Yonah tries in vain to hire Sampson to help him locate his missing people and defy Reager as they awkwardly exit her vehicle and begin a long, methodical walk. Sampson, perplexed, enraged, and fearful of a conspiracy, declares that she cannot pledge allegiance to Yonah solely on the basis of his terms.

​It is at this point that an unseen aircraft appears. Sampson, stunned and perplexed, begs her to explain herself by asking, “Where are you from?” When Yonah says “Earth,” he hopes to clear up Sampson’s misunderstanding by giving him a gift that only NASA can authenticate: an Apollo 11 plaque that reads “We came in peace with all mankind.” When she raises her head to thank him, all that remains of Yonah and the enigmatic aircraft is a warping of air.