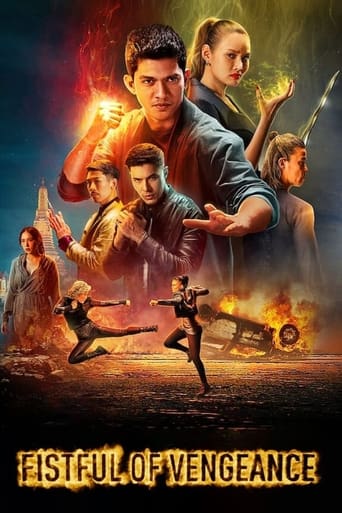 Fistful of Vengeance 2022 DVD Cover. A revenge mission becomes a fight to save the world from an ancient threat when superpowered assassin Kai tracks a killer to Bangkok.

The movie is a sequel to the television series “Wu Assassins,” Kai Jin (Iko Uwais) is a chef in San Francisco who is the modern inheritor of an ancient, magical fighting tradition, and his friends are Lu Xin Lee (Lewis Tan) and Tommy Wah (Lawrence Kao). The follow-up film finds the friends looking for answers after the mysterious murder of Jenny, Tommy’s sister. Their only clue is a talisman found with her body.

Their search for answers leads the group to Thailand, where they meet the billionaire developer William Pan (Jason Tobin). Pan explains that Jennie’s death was a small event in a larger plot run by his twin sister, Ku An Qi (Rhatha Phongam), the head of the Bangkok underworld, who hopes to unite ying and yang talismans.

Kai wants to put an end to this scheme on his own, but his friends insist on fighting by his side as he pursues the criminals.