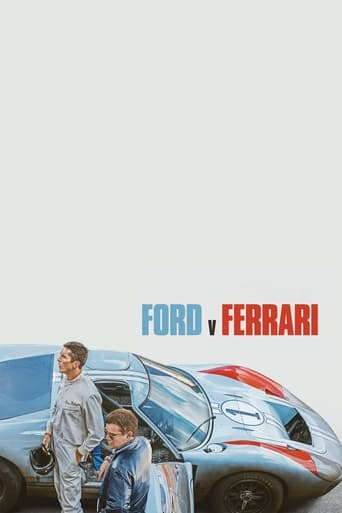 Carroll Shelby (Matt Damon) is a former racing car driver who is forced to retire early due to a heart disease and pursues a career in car sales. He’s a natural salesman and people guy, warm and likable. He’s already a fantastic car builder and engineer. Meanwhile, Ken Miles (Christian Bale) works as a mechanic and runs his own business to support his wife Mollie (Caitriona Balfe) and son Peter (Noah Jupe). He says things as it is, which may irritate clients, but he never sugarcoats anything.

When Ken’s car is told it doesn’t follow rules at a track, he becomes enraged and starts swearing at the race official; Carroll notices this and calms him down; however, the two get into an altercation, and Ken throws a wrench at him. Then, the IRS comes to Ken’s garage and closes it down, forcing him to give up much of his racing in order to support his family.

Meanwhile, Henry Ford II (Tracy Letts) is angry at Ford Motors because profits are down and his father’s business is in jeopardy. He starts getting pitches from his subordinates, and one of them, Lee Iacocca (Jon Bernthal), suggests that the sexiest cars are racing cars, such as Ferraris. He believes that if Ford will win the 24-hour race at Le Mans, they will be at the top.

To do this, they go to Italy to make a contract to the bankrupt Ferrari: they will purchase the company while Enzo Ferrari (Remo Girone) retains ownership of the racing division. Ferrari uses this bid to persuade Fiat to make a successful offer, and Fiat accepts. Ferrari orders the Ford executives to shove it and refers to Henry Ford as a fat pig. As they return, Henry demands that they repeat everything Ferrari said, and he becomes more determined than ever to defeat Ferrari. He makes the decision that they will form their own racing division.

Lee asks Carroll if he will be the head of their racing team, developing and testing the cars, becoming the first American to ever win at Le Mans. Carroll accepts, and enlists the help of Ken, the best driver he knows. Mollie becomes enraged when she sees Ken leaving with Carroll and wants to know the facts. He tells her he’s been paid a lot of money to race, and she’s ecstatic – she really doesn’t want him to lie to her again.

As the team gets the car ready for their first major race, Ford vice president Leo Bebee (Josh Lucas) confronts Carroll and informs them that Ken’s rakish, volatile personality isn’t compatible with the Ford brand, that he can’t be trusted to do press and serve Ford well, and that he can’t be their driver. Carroll fights for Ken, but he is obliged to remind him that he will not be running, which enrages him. Carroll is able to persuade Henry to rehire Ken after Ford loses the race.

He apologizes and invites Ken back to his home, but the two wind up having a violent altercation on his front lawn. Mollie gets them some frozen sodas after they eventually give up, tired.

Ken rejoins the team, who have been working nonstop to perfect the car. Lee tells Carroll that Leo is hell-bent on getting Ken kicked off the squad and plans to do so on their next visit. Knowing this, Carroll locks Leo in his office and takes Henry out for a spin in the race car, where Henry learns firsthand how frightening and exhilarating racing can be. When they finally come to a halt, he sobs. Carroll gives him a deal: if they win at Daytona, he will race at Le Mans in France.

If they lose, Henry gains complete ownership of Carroll’s company. They face stiff competition at Daytona from a second Ford team that Ford had commissioned to see who could engineer the better car. Ken wins the race, guaranteeing their team a seat at Le Mans and guaranteeing Ken’s participation.

Le Mans is approaching in France. Both Ferrari and Henry will be there. Ken’s door won’t close as the race begins, slowing him down for the first lap. The car they engineered was capable of reaching very high speeds, but doing so burnt out the brakes, forcing the pit crew to swap them out late in the race.

The Ferrari Italians are outraged, claiming that this is a breach of the rules, but Carroll points out that the rulebook specifically states that they are entitled to modify pieces, but it isn’t stated which ones. Ferrari’s car eventually spins out and flips, putting Ken in first place and allowing Mollie and Peter to watch on TV as Ken completes his long-awaited “great” leg.

Leo, who had been attempting to get around Carroll to sabotage their plan, approaches Henry and proposes that the safest picture for Ford will be for all three of their vehicles to cross the finish line together. He accepts, and Leo issues an order to Carroll, who declines. Carroll informs Ken of the instructions, but emphasizes that it is his race and that he will help him no matter what. Ken takes the lead at first, but gradually relents and slows down, allowing the other drivers to catch up and cross the finish line together.

All congratulates Ken on his victory before a technicality – he started behind another driver – places him in second place rather than lead. Carroll is enraged, but Ken understands the situation and the two depart together.

Weeks later, when researching a new vehicle concept called the J-Car, Ken, who was not wearing any safety gear at the time, crashes and dies. Carroll finds Peter at his family’s house and shows him the wrench that Ken hurled at him. He gets into his car and drives off into the distance, ignoring his illness. Carroll’s cars won the Le Mans four times, according to the postscript, and Ken was inducted into the racing hall of fame posthumously.