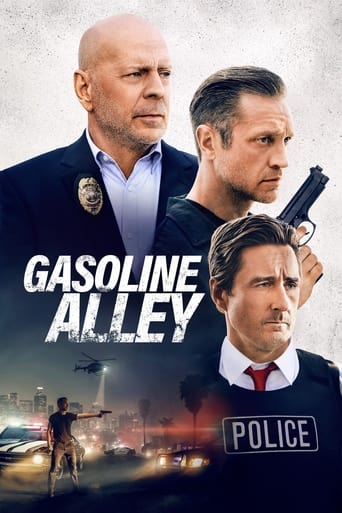 Gasoline Alley 2022 DVD Cover. A man implicated in the triple homicide of three Hollywood starlets begins his own investigation. Needing assistance, he enlists the two detectives on his tail in order to expose a conspiracy more explosive than any of them imagined.

The next day, Star and three other women turn up dead. Since Jimmy was the last person Star was seen with, and a lighter with his shop’s logo was left at the crime scene, detectives Vargas (Luke Wilson) and Freeman (Bruce Willis) suspect him.

So Jimmy does some investigating of his own, picking up a trail leading to small-time drug-dealer Percy Muleeny (Rick Salomon). But the deeper he digs, the more trouble Jimmy finds himself getting into.