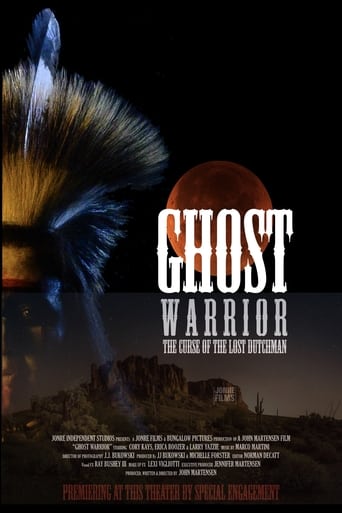 Ghost Warrior 2021 DVD Cover. In the last 150 years, over 200 individuals have perished in Arizona’s Superstition Mountains. The curse of the Lost Dutchman’s Mine is widely blamed for this. The mine is claimed to be guarded by an Apache Warrior Spirit, who will slay anybody who comes too close. That is, until Jake Maloy, a retired special forces operator, happens to wander into the region. In Ghost Fighter, a struggle between the spirit realm and a modern warrior is about to commence.

An ancient miner was prospecting in Arizona’s Superstition Mountains once upon a time. The miner, known as the Dutchman, stumbles across a gold-filled cave by chance. It was the most gold he’d ever seen. The Dutchman used his pick to chisel away at a chunk of gold.

He returned to Apache Junction, pleased to share his good fortune. He told a few close pals about the gold while he was there. The Dutchman and his companions headed off the next day to recover their riches.

They sought and searched, but they were unable to find the gold-filled cave. It was as though it had simply gone. The Dutchman and his companions vanished in the months that followed, never to be seen again.

According to legend, his forefathers sacrificed the greatest Apache Warrior. As the Ghost Warrior, he will traverse the Earth for all eternity. His sole responsibility is to safeguard the Apache gold at all costs. He murders everybody who comes near to uncovering the Mine and the riches with his spiritual talents and the only weapons he has, a knife and tomahawk.

Jake Maloy, a veteran special forces operator, is trying to put his life back together after returning from Afghanistan. For him, civilian life is devoid of thrill.

Jake is always looking for his next adrenaline rush. Fortunately, his lovely and intelligent wife Aurora shares his enthusiasm for his excursions. The two alphas have an interesting lifestyle that includes undersea treasure seeking, tiny plane trips, and off-road prospecting.

They wreck their UTV on one of their trips in the Superstition Mountains. They are all too eager to trek out since they are unable to make repairs. When they find themselves in a struggle for their life with the Ghost Warrior, what was supposed to be a simple trek turns into a nightmare.

The duo discovers and exploits the Ghost Warrior’s vulnerability. They figure out that the only way to take him out is to use his own weapons against him. The two manage to turn the tables on the Ghost Warrior and survive the epic battle.

The argument that lasted all night comes to an end as the sun rises on a new day. Just before their own annihilation, each side is obliged to capitulate to the other. In absolute loss, there would be no winner.

The Ghost Warrior spares their lives as a last demonstration of mutual appreciation for each other’s perseverance and battle prowess. The Ghost Warrior’s Tomahawk is then returned to Jake, allowing him to resume his goal of defending the Apache riches. The curse carries on with that gesture.