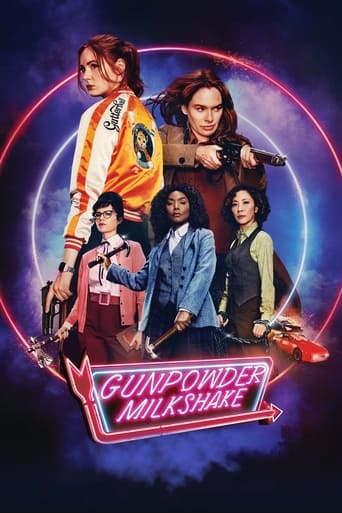 Gunpowder Milkshake 2021 DVD Cover. Three generations of women stand up to those who want to take everything away from them.

Scarlet (Lena Headey), a skilled assassin, was forced to abandon Sam (Karen Gillan) when she was just 12 years old.

The Firm, the vicious crime group for whom Sam’s mother served, reared her. Sam has grown into a vicious hit-woman, 15 years later, following in her mother’s ways.

Her “talents” are put to work cleaning up The Firm’s most hazardous disasters. She’s as dependable as she is efficient. When a high-risk assignment goes awry, Sam is forced to choose between serving The Firm and saving the life of an innocent 8-year-old girl named Emily (Chloe Colemaan).

Sam has just one chance to survive with a target on her back: reunite with her mother and her murderous companions, The Librarians (Angela Bassett, Michelle Yeoh and Carla Gugino). These three generations of women must now learn to trust one another, stand up to The Firm and its army of henchmen, and raise hell against those who threaten to rob them of all they own.