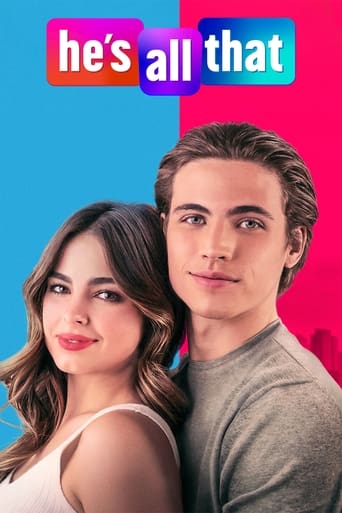 He’s All That 2021 DVD Cover. To get revenge on her ex-boyfriend, an influencer attempts to transform an unpopular classmate into prom king.

Padgett Sawyer (Addison Rae) is a high school Instagram influencer who lives with her divorced mother, a local nurse (Rachael Leigh Cook), although pretending to live in a luxurious apartment to disguise her true living situations from her followers and advertisers. Padgett realizes one day that her boyfriend, fellow influencer and rising hip hop musician Jordan Van Draanen (Peyton Meyer), has dumped her for a backup dancer, and she is completely humiliated when a live stream of her tantrum results in the loss of followers and sponsorship opportunities.

To make amends, she accepts a challenge to make Cameron Kweller (Tanner Buchanan), an antisocial photography student, the school’s least popular male, prom king. Despite his disdain for her, Padgett persists with the challenge. She learns about him via his younger sister Brin and, in order to grow closer to him, begins taking horseback riding lessons with him.

Padgett begins to bond with Cameron over time as she keeps her word on the challenge and learns that he and his younger sister lost their mother years ago and live with their grandma while their father is in Sweden. Padgett improves Cameron’s look and clothes, and seeks to broaden his social connections at her friend Quinn’s party, where he rescues her from embarrassment when Jordan comes with his girlfriend.

Cameron gets into a fight with Jordan when he tries to get sexual with Brin at Padgett’s friend Alden’s (Madison Pettis) Great Gatsby-themed birthday party, and his mother’s camera is ruined in the process, causing him to leave the party in a rage despite Padgett’s attempts to console him, causing her to regret following through with the bet, but she does not back down from the challenge.

The next day, Alden turns on Padgett and discloses her plan to become prom queen alongside Jordan, showing her real colors and being responsible for Padgett’s tantrum being live-streamed. Padgett begins to develop emotions for Cameron, but she is hesitant to voice her sentiments after kissing him. When Brin discovers that Padgett kissed Cameron, she suggests that he ask her to prom. Alden discloses the challenge she arranged with Padgett in an attempt to secure Padgett’s defeat, which enrages Cameron. Padgett’s mother encourages her to attend the prom and urges her to be herself.

Cameron refuses to attend to prom, but Brin persuades him to go after noticing that her elder brother has been smiling for the first time since their mother’s death and the introduction of Padgett into his life. He fails to appear, and Padgett refuses her role as Prom Queen. Padgett then rides his horse outside the school and kisses Cameron after apologizing. Cameron pardons her, and the film concludes with Padgett and Cameron riding horses.

Watch He’s All That Now