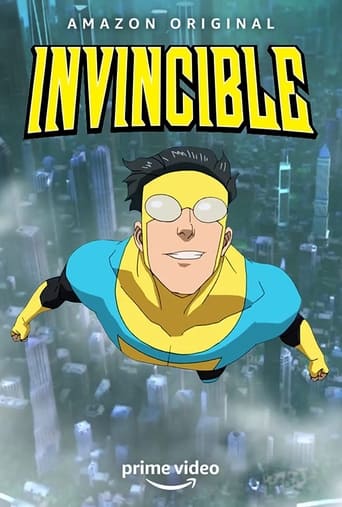 Embed HTML not available.
DOWNLOAD FULL COVER BECOME A VIP MEMBER Join us and download all covers in high resolution!

Invincible Season 1 DVD Cover. Invincible is the son of Omni-Man, an extraterrestrial superhero of the Viltrumite race. Invincible inherited his father’s superhuman strength and ability to fly and he has sworn to protect the Earth. As a teenager, he had trouble adjusting to his newfound powers and coping with the reality of his origins.

The Mauler Twins, hulking villainous scientists, are repelled by the Guardians of the Globe and Nolan Grayson / Omni-Man as they assault the White House. Mark, Nolan’s son, attends school and protects Amber Bennett from bully Todd, who retaliates by punching Mark to the ground before Amber saves him. Mark’s superpowers eventually manifest, and he completes his job in time to inform his parents at dinner.

Even though Nolan is unsure at first, he starts to teach Mark how to use them. Mark is taken off balance by his father hitting too hard, as he wishes to stress the seriousness of becoming a superhero. Mark, who is both mentally and physically injured, lets off steam by halting a robbery while dressed in a handmade costume.

Nolan takes Mark to visit superhero suit tailor Art Rosenbaum after a heart-to-heart with his father, who makes a proper superhero suit for Mark after he decides to declare himself “Invincible.” Later, Nolan entraps the Guardians and brutally murders them all before succumbing to the effects of their resistance. 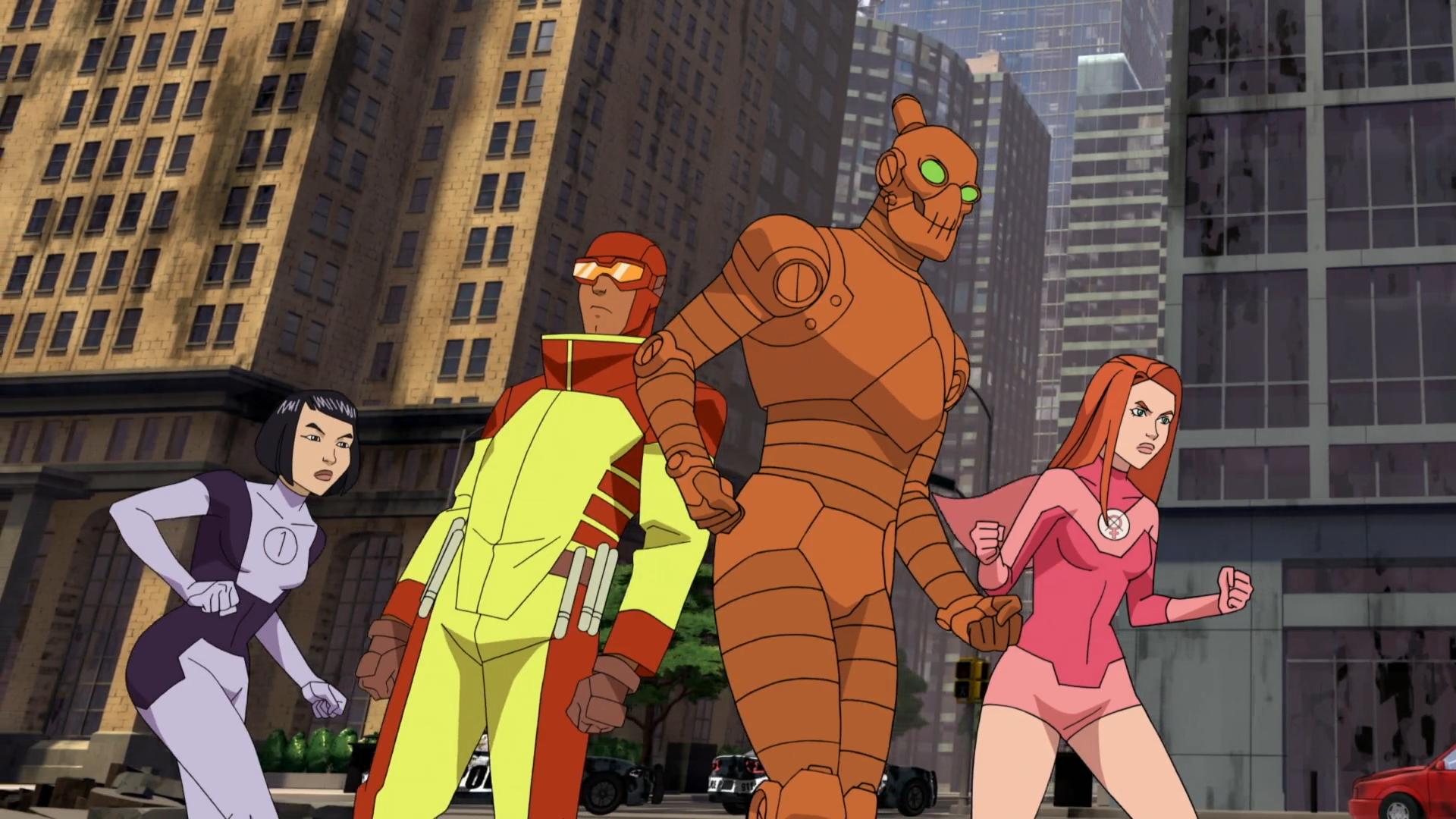 Director Cecil Stedman informs Mark and his mother, Debbie, after the shadowy Global Defense Agency (GDA) treats a comatose Nolan in their underground hospital but fails to recover the Guardians. Mark assists the Teen Team in holding off extradimensional aliens known as the Flaxans until the Flaxans quickly age and retreat. “The Robot,” the Teen Team’s chief, deduces that this is due to a time gap between the Flaxans’ homeworld and Earth.

They exchange their personalities and become friends after Mark acknowledges Atom Eve as Samantha Eve Wilkins, a classmate. The Flaxans return with anti-aging technology, but Mark and the Teen Team kill it, causing them to flee once more. The Flaxans return and almost prosper before a resurrected Nolan sends them back to their homeworld, where he wreaks havoc in revenge before returning when news of the Guardians’ deaths breaks. Meanwhile, Mark engages in combat with Allen the Alien, who is bent on putting Earth’s defenses to the test.

Mark corrects his misconception of “Earth” with another world, “Urath,” by calling a time-out to chat and learn Allen’s mission. Allen walks away, saying goodbye in a polite manner. Simultaneously, demon investigator Damien Darkblood looks at the murders of the Guardians for Cecil, theorizing that the murderer was one of the protagonists. 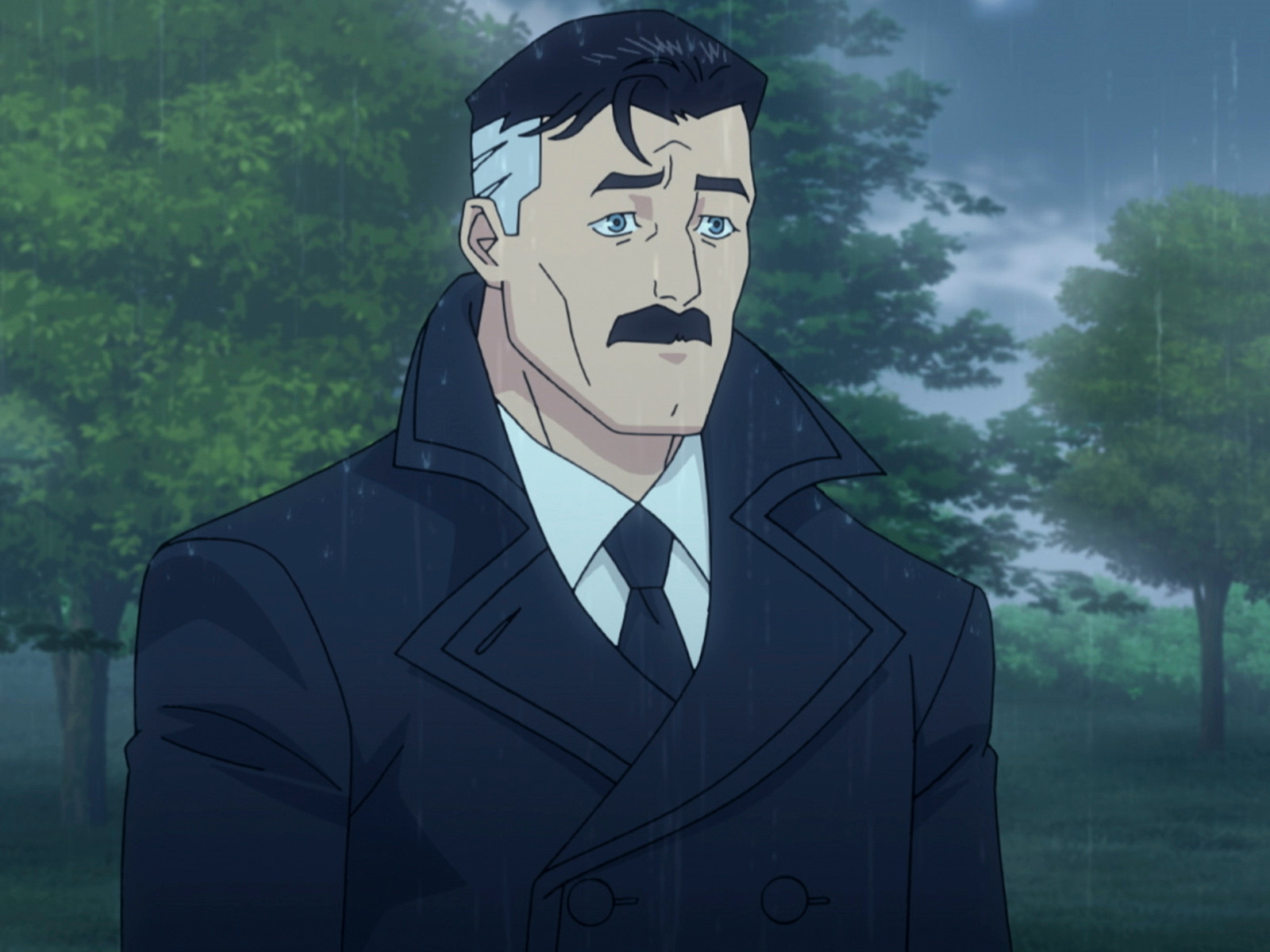 The Graysons attend the Guardians’ private burial with their loved ones after a televised wake, where Darkblood asks Nolan privately and hints at his fears. Given his handling of the Flaxan invasions, Cecil commissions Robot to form a New Guardians roster of his choice, so Robot combines the Teen Team with Monster Girl, Black Samson, and Shrinking Rae.

Eve, on the other hand, quits right away, already enraged by her teammate boyfriend Rex Splode, whom she had caught cheating with teammate Dupli-Kate after returning from the funeral. As Mark gets Amber’s number, he arranges a “research date,” which is cut short for an hour while Eve assists Eve in stopping Doc Seismic from attacking Mt. Rushmore. Amber stays for their date despite the fact that she has been waiting.

When Rex wants to make amends with Eve, she refuses and goes looking for Mark, finding him with Amber and fleeing unnoticed. The Mauler Twins escape from their GDA prison with Robot’s assistance, though one of them sacrifices the other. When Darkblood interrogates Debbie, he discovers that Nolan has nothing in common with her. Because of this experience, she is wary of Nolan, who detects Darkblood’s residual influence. 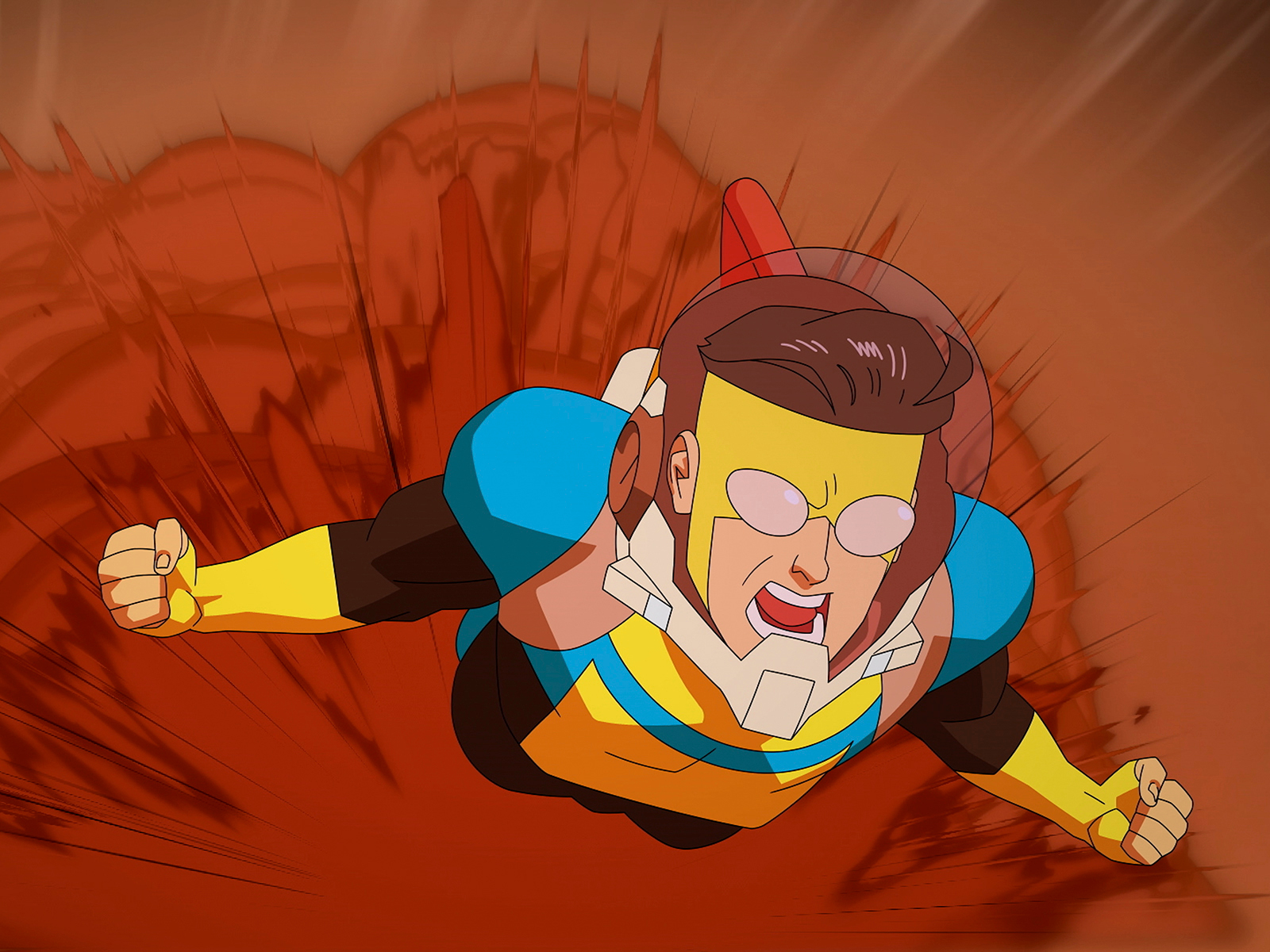 Red Rush’s widow, Olga, is furious that the GDA has failed to apprehend the Guardians’ murderer, and hires Debbie to sell her house so she can return to Moscow. Cecil asks Nolan to protect the first manned spacecraft to Mars, but Nolan declines due to his obligations to protect Earth, so Mark steps in. Despite a successful landing, Mark’s inattention causes the astronauts to be abducted by Martians.

To discourage the parasitic Sequids from invading Earth and consuming the planet, the Martian Emperor orders their execution. Mark rushes the astronauts and their shuttle away, oblivious to the fact that one of them has been replaced by a Martian. Meanwhile, when Nolan and Debbie are on vacation in Rome to rekindle their romance, he uses half-truths to win Debbie’s confidence.

Cecil knows Nolan is the murderer, so he can’t move until he figures out why he’s doing it. Cecil banishes Darkblood to Hell, oblivious to the fact that the detective hid his notepad in Debbie’s closet, knowing he could not abandon the investigation. Robot keeps track of the surviving Mauler’s success and tactics before stealing a DNA sample from Rex to give to his true self, the deformed Rudy Connors. 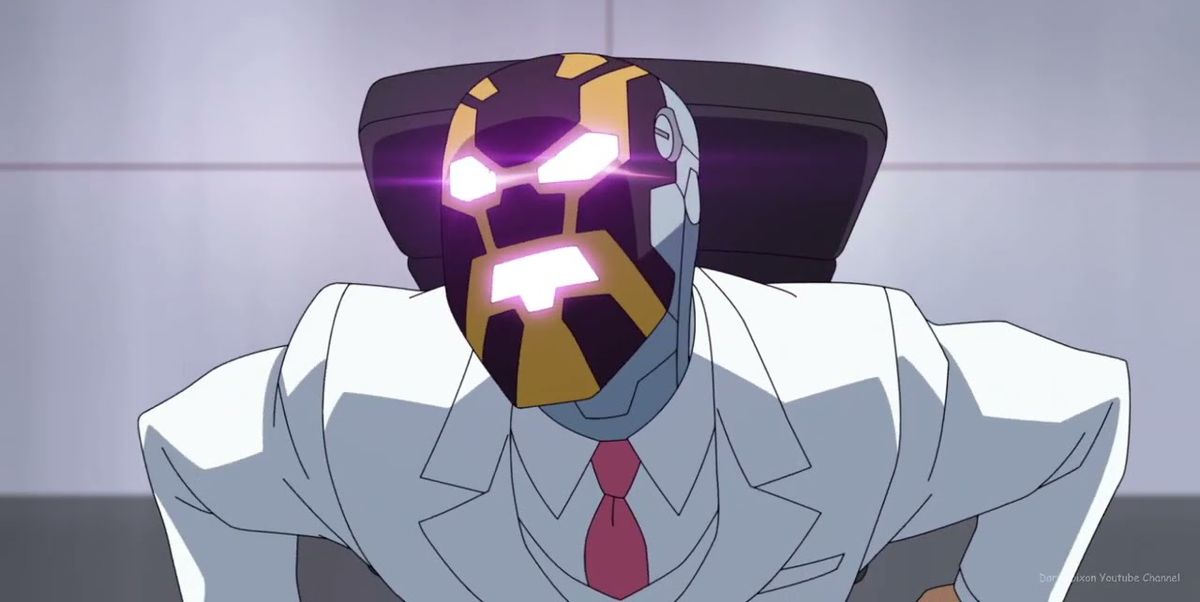 Debbie’s lingering fears are confirmed when she discovers Darkblood’s notepad, and she tracks down Nolan’s bloody super-suit while he is gone. Robot confronts the resurrected Mauler Twins with a work opportunity after Black Samson advises his teammates on neglecting people due to their infighting. Meanwhile, Mark vows to assist Amber at a soup kitchen where she works as retribution for his behavior as Invincible, which caused him to be late and shattered her faith in him.

However, he must also assist Titan, a superpowered thug, in defeating Machine Head, who foresaw their assault and recruited a slew of villains to protect them.

The Guardians arrive to assist, but are outnumbered and brutalized by Thokk, the War Beast, who flees in horror after seeing the other villains being defeated quickly. Machine Head is apprehended by the GDA, and Mark and the others are evacuated, allowing Titan to take over Machine Head’s activity. Eve joins Amber as a volunteer after losing her job as a heroine and seeking guidance. She does, however, depart when Cecil informs her of Mark’s hospitalization.

Scientists from the GDA analyze samples of Mark’s blood and find that the cells are immune to any lethal test they perform. 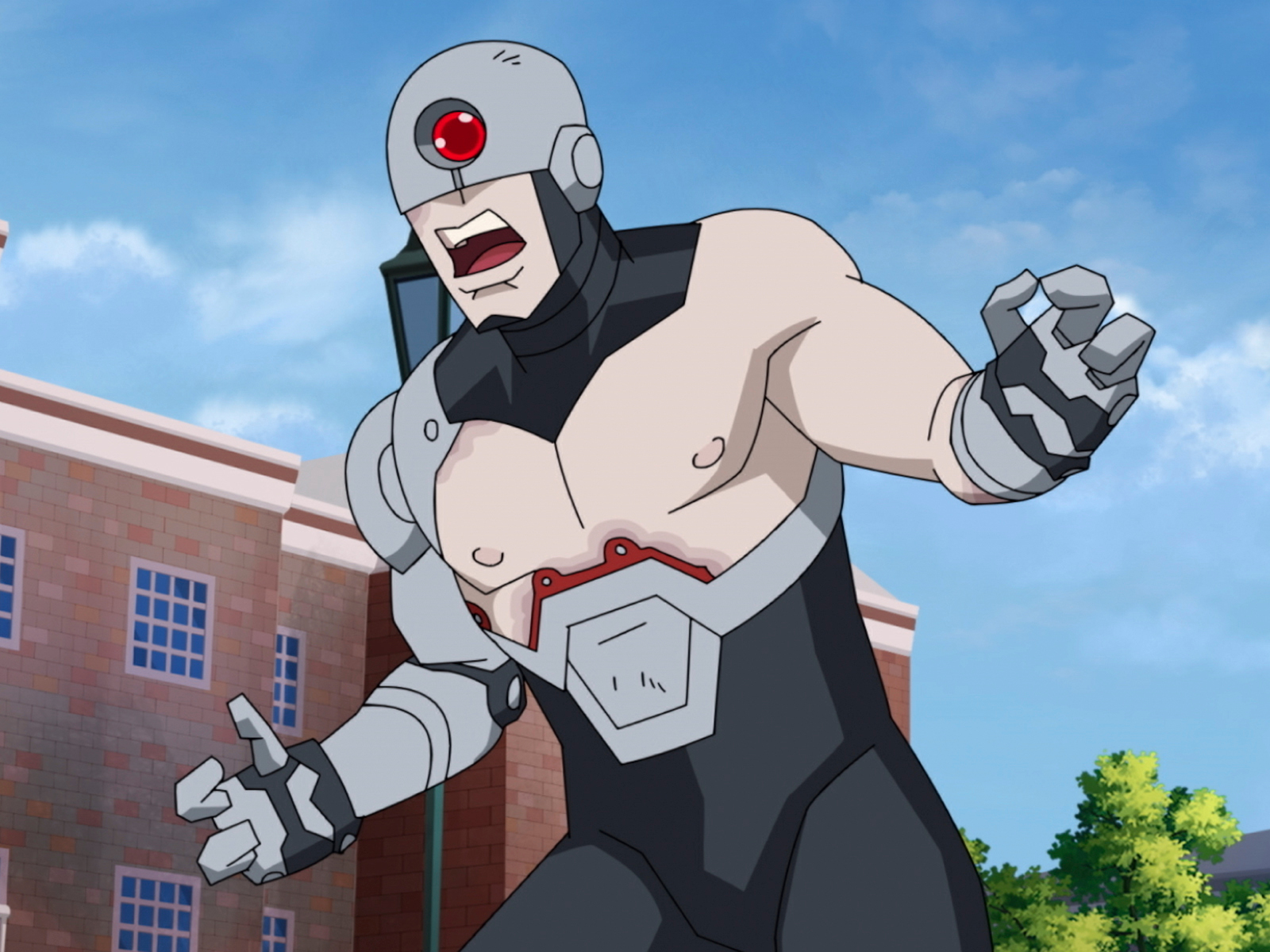 Mark makes amends with Amber before accompanying his best pal, William, on a weekend visit to Upstate University to see his ex-boyfriend, Rick Sheridan, who has been humbled by his week-long rehab. One of D.A. Sinclair’s cyborg experiments, however, survives and battles Mark before killing himself, allowing William to deduce Mark’s identity.

Due to Mark’s absence during the cyborg’s rampage, Amber breaks up with him, and he sacrifices reconciliation to save William from Sinclair. After witnessing Rick’s transformation into a cyborg, William’s pleadings for assistance allow Rick to transcend his transformation and aid Mark in his victory. Following Sinclair’s imprisonment, Cecil becomes interested in his technology, which causes Mark’s physiology to be overloaded.

Debbie, meanwhile, has Rosenbaum investigate Nolan’s bloodied coat, revealing Nolan’s role in the Guardians’ deaths. Both choose to remain quiet out of fear, but the discovery throws Debbie into a drunken stupor, prompting her to confront Nolan.

Robot collects secret ingredients to cure Monster Girl after studying her genetics beforehand. When the Mauler Twins work on a body for Robot, they exhume Immortal’s body in preparation to revive him as their enthralled bodyguard if Robot betrays them. Simultaneously, Eve is encouraged by Amber to forego college and use her abilities to help people directly. 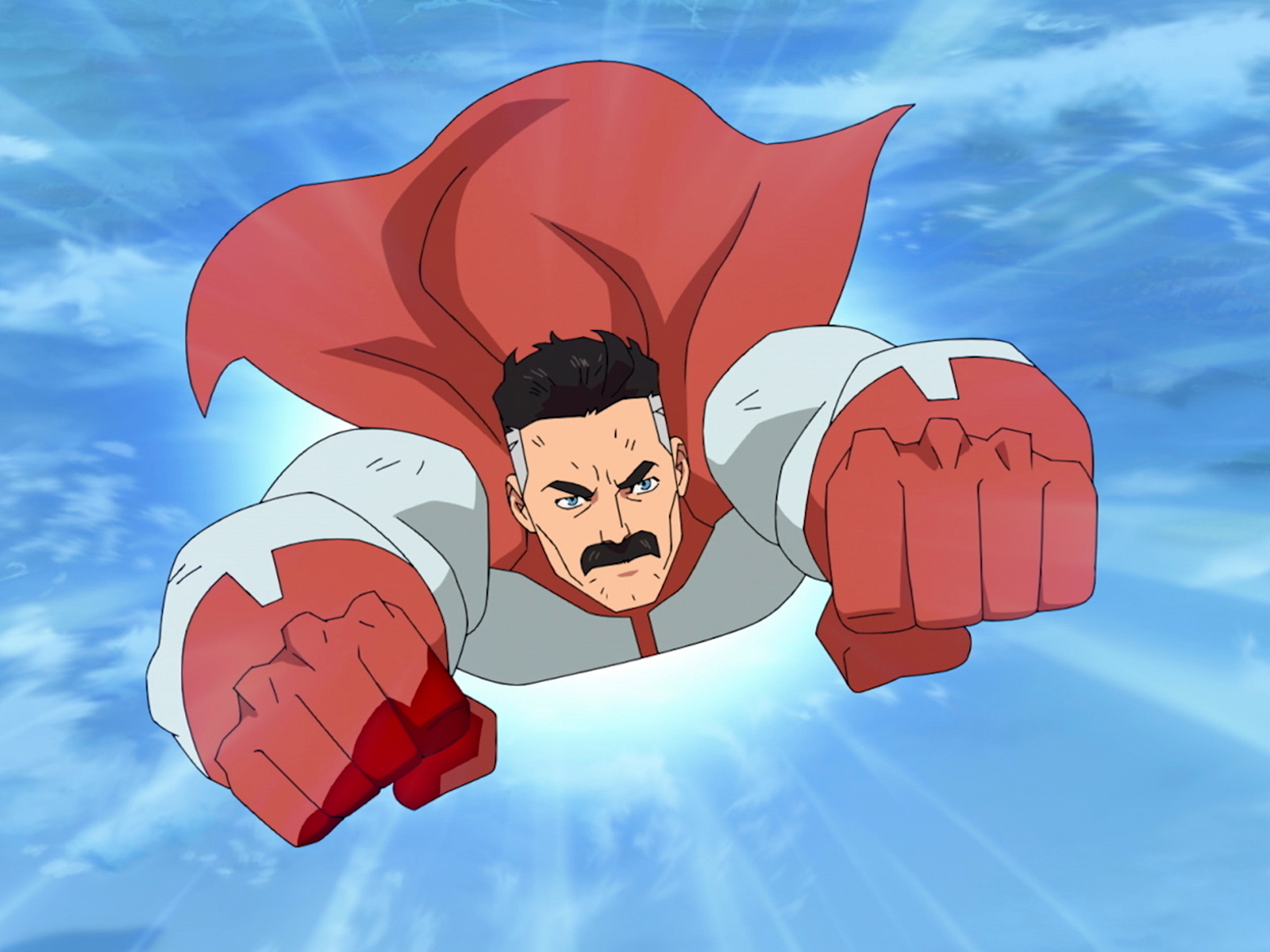 Cecil reveals the facts to Debbie after she relocates to the GDA, just as both watch Nolan murder Cecil’s associate, Donald Ferguson, and other GDA agents. The “Rudy” clone reluctantly euthanizes his progenitor after adding a neural connection update. The latest Rudy leaves for a Guardians summons after paying and betraying the Maulers.

He reveals himself to the squad, who are taken aback by Rudy’s discoveries before discovering the truth about Omni-Man and the fates of their forefathers. Cecil buys time by talking to Nolan before retreating to destroy Sinclair with his “Reanimen” and a modified Kaiju. Amber dumps Mark because he has never trusted her before, despite Mark exposing his superhero identity and having deduced the truth weeks ago.

Mark tries Eve’s advice, but she harshly criticizes his egotism. Cecil orders Eve to leave Mark and meet up with the Guardians after the two intercept Nolan’s battle with the Kaiju. Immortal flies off to kill Omni-Man and avenge his team’s massacre just as the Maulers resurrect him, though Mark barely defeats the Kaiju. Before Nolan eventually requests to speak with a befuddled Mark, news helicopters catch Omni-Man murdering Immortal in a live global broadcast.

Invincible Season 1 – Episode 8″Where I Really Come From” 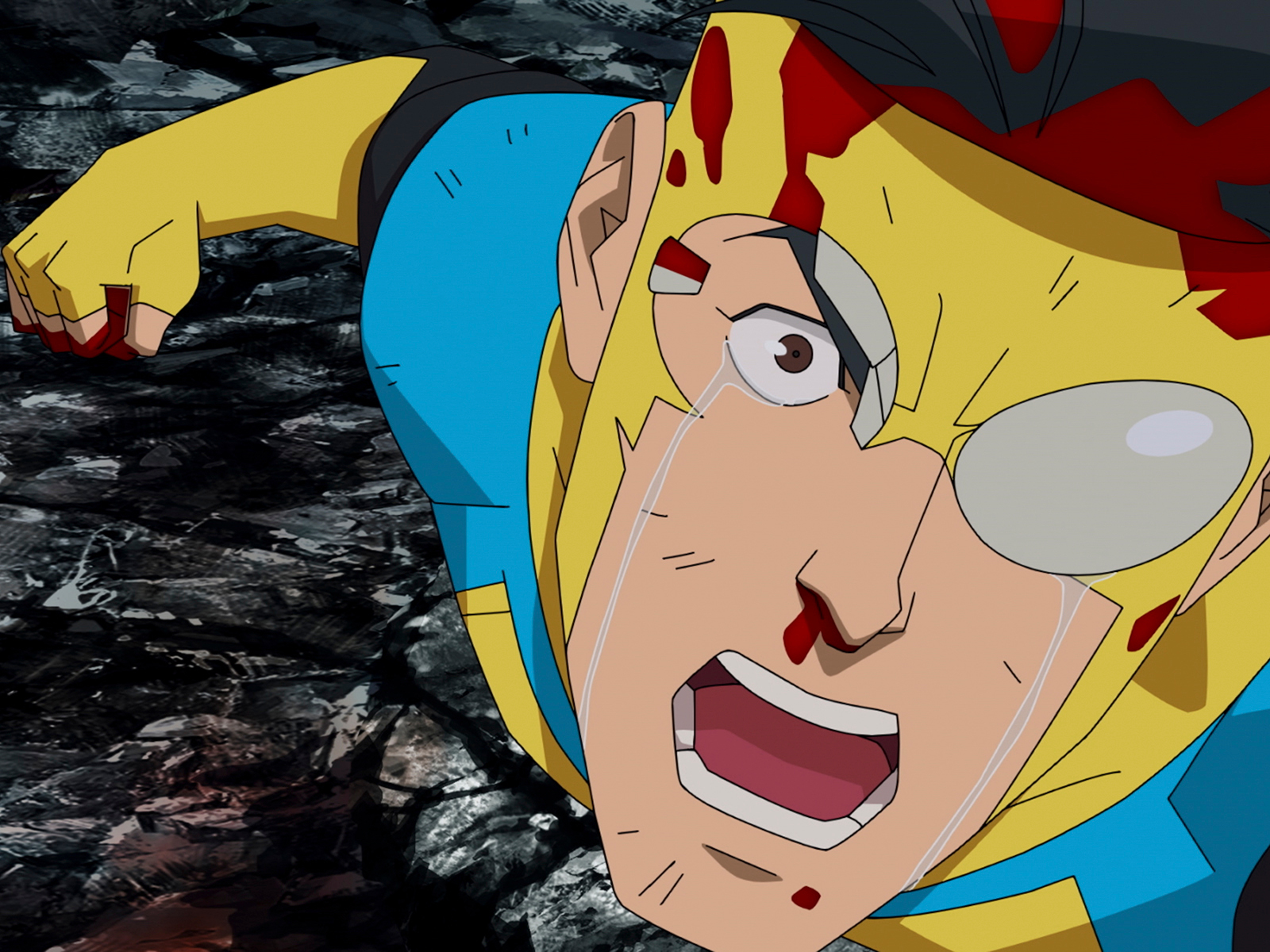 Nolan outmatches and brutalizes Mark after revealing he is an infiltrator for the Viltrumite Empire sent to invade Earth, destroying Chicago and murdering thousands. However, as Nolan flashes back to Mark’s youth, he sees his bloody son, ponders his barbarism, and tearsfully flies away from Earth. The Guardians and Eve band together to assist in the humanitarian efforts in Chicago.

Cecil assists Debbie and Mark by fabricating Nolan’s civilian death in a gas crash, allowing them to stay alive financially thanks to his book royalties. Debbie, who has been saddened by Nolan’s deception, enjoys a drink with Rosenbaum, who has also been affected by Nolan’s betrayal, while Mark and Amber resume their friendship following his two-week recuperation.

Cecil dispatches Mark to intercept an approaching UFO, which is really Allen, after she and William discover Eve is indeed a superhero. Allen apologizes for not informing Mark about the Viltrumites as he updates him on events. However, with Nolan’s abandonment of Earth, Allen predicts that a Viltrumite fleet will attack the planet, while also believing that Invincible will aid the Coalition in stopping Viltrumite expansion.

As Mark prepares to graduate from high school, the Maulers are apprehended, villainous powers from the previous year plot to resurface, and Cecil has DA Sinclair mass-produce Reanimen as a Viltrumite countermeasure.