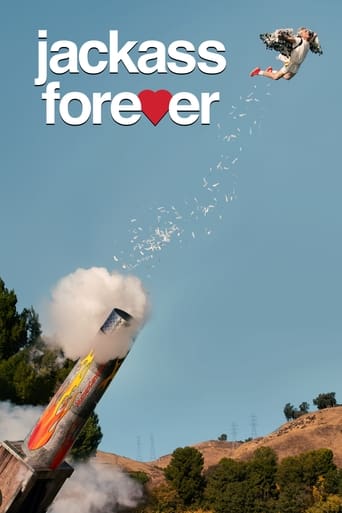 Jackass Forever 2022 DVD Cover. Celebrate the joy of a perfectly executed shot to the groin as Johnny Knoxville, Steve-O, and the rest of the gang return alongside some newcomers for one final round of hilarious, wildly absurd and often dangerous displays of stunts and comedy.

In JACKASS FOREVER, Johnny Knoxville, Steve-O, Wee Man, and the rest of the Jackass crew return, along with some new cast members, to try some new dumb stunts and revisit a few of the older ones.

They form human ramps, try to survive a dark room with a rattlesnake in it, brave a giant waterslide, play musical chairs, try to fly, march on a moving treadmill, attempt a triple wedgie, and ride the Vomitron.

They also re-attempt the one stunt they’ve so far never been able to crack: lighting a fart on fire underwater. The guys maybe a little older, but they’re certainly not wiser.