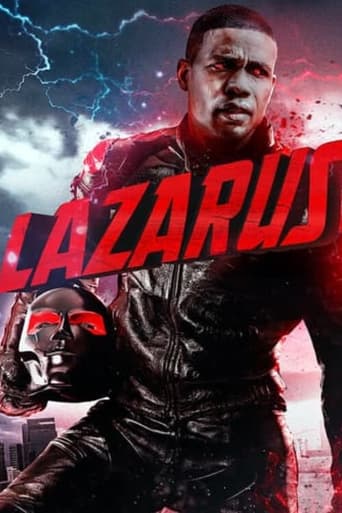 Lazarus 2021 DVD Cover. After a man is revived from death by murder, he finds that he has otherworldly powers to help avenge the crime ring out to destroy him and his city.

The story of Lazarus revolves around a man (Sean Riggs) who is murdered, but only for a short time.

When he regains consciousness, he learns he has been given exceptional abilities that allow him to battle the organization responsible for plunging his city into darkness in a super-heroic manner.

The film will premiere in the United States and Canada on the online, ad-supported platform.

R.L. Scott, whose previous films include Call Me King, wrote and directed Lazarus, a film about a man who gains superpowers after being killed and uses them to fight evil forces. Sean Riggs, who has appeared in shows such as S.W.A.T. and You, plays the lead. Costas Mandylor, Aeriel Miranda, Shane Brolly, Nicki Micheaux, Noel Gugliemi, Linc Side, Adamo Palladino, and R&B singer Mya are among the cast members.

Tubi had over 30,000 film and television titles from 250 different suppliers. Since being purchased by Fox in 2020, it has been showcasing newer content, becoming a destination for next-day streams of top unscripted shows like The Masked Singer.

Tubi has benefited from a range of developments, including smart TV adoption, cord-cutting, and Covid-19 lockdowns, much like other ad-supported streaming services like Pluto TV or Crackle. Last summer, the service revealed that it had hit 33 million monthly active users, up 65 percent from the same period last year, with monthly viewing time exceeding 200 million hours.

In a press release, Tubi content chief Adam Lewinson said, “Lazarus proves that independent filmmakers can produce strong superhero tales, a space normally reserved for the majors.” “A diverse and talented cast will perform in an otherworldly Los Angeles venue, fully free and exclusively on Tubi.”