Love You Right An R and B Musical 2021 DVD Cover 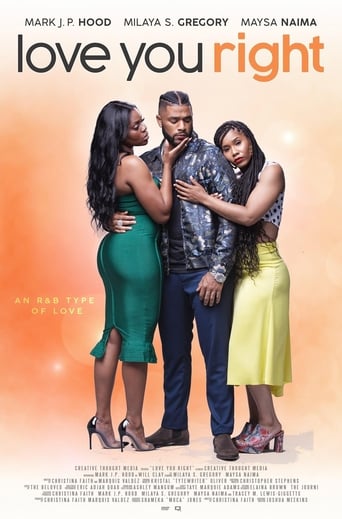 A rhythm and blues superstar tries to put his life back together after losing everything.

Love You Right: An R&B Musical (2021) DVD Cover is a series of events spiral out of control, shattering the R&B star’s fame, fortune & friendships.

To regain perspective, the R&B star must battle with self-love and reconnect with what’s truly important love.

This unique story stands out amongst the stories of pain and hardship to remind people of the power of love & true friendship.

Writer, Director, Producer of Love You Right An R and B Musical 2021 DVD Cover
Born Christina Faith in Atlantic City, New Jersey to a casino executive and drug-dealing hustler, Christina Faith’s life journey is the kind of school of hard knocks story that’s filled with all the complexities and nuances of a woman bound for greatness.
C. Faith has spent many subsequent years self-studying film and marketing.

As an Asst. Professor at Esperanza College and digital media instructor at Vocatio Career Prep High School C.Faith continues to pour into the next generation. C. Faith has dedicated over a decade to developing her craft through a digital series ( Single and Anxious – Amazon Prime), short films (Killing Her Softly, Carlos, Plan B, The Reunion), documentaries (16 for 16: The Contenders, Maverick Thoughts) and theater productions (Nickey’s Flesh, Haunted), Faith is currently in post-production of her first feature film Love You Right: A R&B Type Musical.

A skilled director, producer, and writer, Christina Faith is a powerful visionary bringing to life stories that have been lost or marginalized in today’s culture.

He was a fan favorite on NBC’s THE VOICE where his coach Pharrell Williams declared that he is “Marked for the entertainment industry.”

As an accomplished theatre actor, he has been seen on stage regionally in many critically acclaimed productions including JESUS CHRIST SUPERSTAR, THE SCOTTSBORO BOYS, SISTER ACT THE MUSICAL and he won the coveted Best Leading Actor in a Musical Award from The Black Theatre Alliance for his performance as Prince Charles in THE OTHER CINDERELLA. He is a 2 time Chicago Music Award “Best Male Vocalist” nominee and he has traveled the world and shared the stage as a supporting vocalist to many artists including Snoop Dogg, Kelly Rowland, 2Chainz, Kirk Franklin, Ledisi and many more.