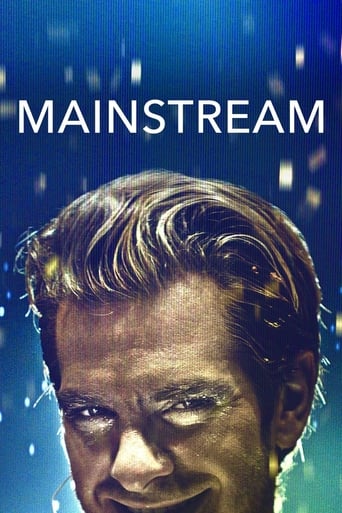 Mainstream 2021 DVD Cover. In this cautionary tale, three people struggle to preserve their identities as they form an eccentric love triangle within the fast-moving internet age.

Frankie, a young woman in her early twenties struggling to figure out who she wants to be, lives just above Hollywood Boulevard.

With Frankie’s father’s death still fresh on her mind, she realizes she needs to do something meaningful but isn’t exactly how, and with the world now awash with content and narcissism, it’s difficult not to “compare and despair.”

Frankie is stuck working as a waitress at a corner comedy club with her best friend Jake, and she begins to wonder what people trust now. Frankie isn’t inspired to lm him and post his anti-mainstream rants to the internet until she has a few celestial run-ins with the enigmatic Link, a guy who appears to live life without laws.

This unlikely band of outsiders rises to internet stardom together, thanks to Jake’s support. It’s difficult to remain sane, however, as the burden of relevance mounts and new characters, such as manager Mark, begin making demands to bring in cash. To make matters ever more difficult, Frankie and Link begin to develop romantic feelings for each other.

Frankie stands by and watches as Link transforms into the embodiment of everything he once despised. Frankie doesn’t realize she’s being the beast she helped make until Link publicly humiliates a young fan Isabel and Jake quits the band. A love tale set against the current evolving culture of today’s world about falling in love with someone who doesn’t love themselves.