Masters of the Universe Revelation Season 1 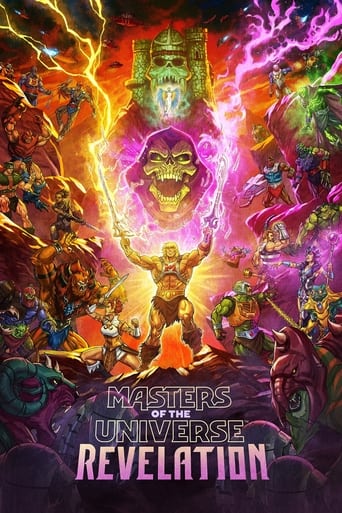 Masters of the Universe Revelation Season 1 DVD Cover. The war for Eternia begins again in what may be the final battle between He-Man and Skeletor. A new animated series from writer-director Kevin Smith.

REVELATION is a direct successor series to the iconic era of MASTERS OF THE UNIVERSE, and it’s a dramatic return to Eternia. The narrative puts our brave warriors and guardians of Castle Grayskull against Skeletor, Evil-Lyn, Beast Man, and the evil hordes of Snake Mountain, and features fan favorites He-Man, Orko, Cringer, and Man-At-Arms.

However, after a violent last fight permanently divides Eternia, Teela must unravel the riddle of the lost Sword of Power in a race against time to avert the Universe’s destruction. Her trek will finally reveal Grayskull’s mysteries.