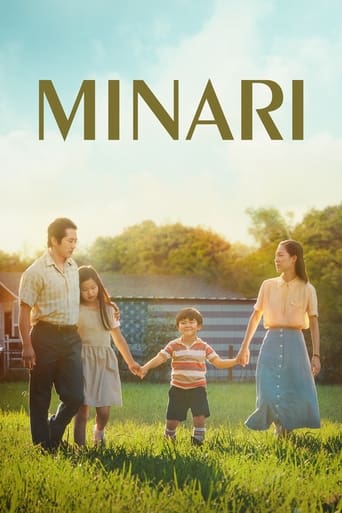 Minari 2021 DVD Cover. In pursuit of their own American Dream, a Korean-American family relocates to Arkansas. The stability of their marriages is tested even further in this new life in the harsh Ozarks with the arrival of their sly, foul-mouthed, yet extremely caring grandmother, who tests the undeniable resilience of family and what really makes a home.

The Yi family relocates from California to a new plot of land in rural Arkansas in 1983, where father Jacob plans to cultivate Korean produce to sell to Dallas vendors. One of his first choices is to refuse the services of a water diviner, instead digging a well in a location he discovers on his own. He enlists the assistance of Paul, a strange local character and Korean War veteran.

Although Jacob is hopeful about the future, his wife Monica is disappointed and concerned about their son David’s heart disease, which causes him to be advised not to run on a regular basis. When David and his sister Anne listen in on Jacob and Monica sexing chicks at a nearby hatchery, they quarrel endlessly.

They plan for Monica’s mum, Soon-ja, to fly from South Korea to help watch the kids during the day. Since she does not adhere to his perception of what a grandma should be, David, who is expected to share a room with her, hates her. Even so, Soon-ja makes an effort to adapt to life in the United States and form bonds with the girls.

Jacob dug a well, but it is now empty. Jacob is apprehensive about paying for county water, but he is compelled to do so ultimately. He runs into further problems, such as a Dallas vendor canceling their order at the last minute. Despite Monica’s expressed wish to return to California, he persists. This puts more pressure on their relationship, bringing it closer to breaking point.

Meanwhile, Soon-ja takes the kids to the creek to grow minari seeds. She extols the plant’s tenacity and utility, and predicts abundant development. Since she shows him card games, bandages his bruises, and soothes him to sleep, David starts to open up to his grandma. Soon-ja also urges him to engage in more physical exercise, something his parents prevent him from doing, claiming that he is healthier than they believe.

Soon-ja had a stroke in the middle of the night. With medical help, she survives, but her mobility and voice are hampered.

Jacob, Monica, Anne, and David travel to Oklahoma City for David’s heart appointment and to meet with a seller interested in selling Jacob’s produce. Despite learning that David’s heart health has significantly changed and Jacob making a deal to sell vegetables to a Korean grocer, Jacob implicitly reveals to Monica that the success of his crops is more important to him than their family’s stability. After an emotional squabble, the two tacitly plan to part ways.

Soon-ja, on the other hand, inadvertently sets fire to the produce barn as they are out. When Jacob returns home, he runs in to save the fields, and Monica follows suit. The fire then gets out of hand, and they decide to rescue each other as the barn burns. Soon-ja, distressed and perplexed, proceeds to drift off into the distance, despite Anne and David’s pleas for her to return.

When David notices she isn’t answering, he sprints over to reach her, blocking her way. Soon-ja recognizes David and reaches for his side, and the grandchildren take her back to her house. The family has fallen asleep on the floor, exhausted from the night before. Soon-ja is awake and sitting in a chair above them, watching them sleep with a subdued smile on her lips.

Then, Jacob and Monica are with the water diviner, who locates a suitable location for a well. They leave a stone there to indicate that they want to remain on the property. Jacob and David then go to the creek to harvest the minari that had evolved successfully, with Jacob remarking about how well Soon-ja chose the location for them to be planted.