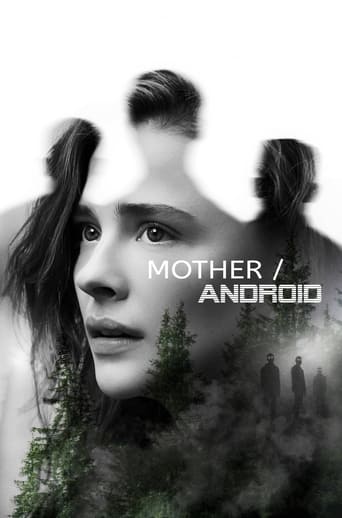 Mother/Android 2021 DVD Cover. Georgia and her boyfriend Sam go on a treacherous journey to escape their country, which is caught in an unexpected war with artificial intelligence. Days away from the arrival of their first child, the couple must face No Man’s Land—a stronghold of the android uprising—in hopes of reaching safety before giving birth.

Mother/Android is a story about the robot apocalypse that truly tells the power of parental love. Chloe Grace Moretz (Chloe Grace Moretz) Georgia, is a young woman living in a world where robot servants have become a normal part of life; until that is, the rise of bionics is a night of violent resistance.

Before that, the biggest problem Georgia faced was how she and her boyfriend Sam (Algie Smith) would deal with her unintended pregnancy-a a few months later, they were crossing the remote northeast road to Boston, where there was a boat. May help them escape from the ruined American ship. All they have to do is to survive the constant threat of robot attacks, not to mention her own upcoming deliveries.