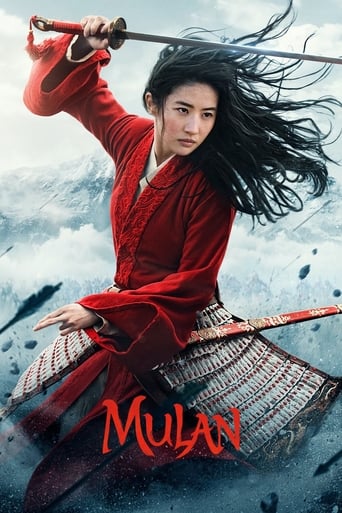 When the Emperor of China issues a decree that one man per family must serve in the Imperial Chinese Army to defend the country from Huns, Hua Mulan, the eldest daughter of an honored warrior, steps in to take the place of her ailing father. She is spirited, determined and quick on her feet. Disguised as a man by the name of Hua Jun, she is tested every step of the way and must harness her innermost strength and embrace her true potential.

Hua Mulan is an ambitious and active girl in Imperial China, much to the dismay of her parents, who hoped she would marry a decent husband one day. Mulan is compelled to consult with a matchmaker as a young woman in order to prove her suitability as a potential partner. Mulan, flustered, tries to spill tea in front of the matchmaker, but a spider causes a panic, causing the kettle to break, and the matchmaker denounces her in front of her family.

An imperial garrison in the north is attacked by Rouran warriors led by Böri Khan. They are helped by Xianniang, a witch who uses her magic to impersonate a surviving soldier and announce the attack to the Emperor of China, who then issues a conscription decree requiring every family to contribute one man to battle Khan’s troops.

Mulan’s aged and feeble father Hua Zhou is forced to swear his allegiance because he has no sons when Imperial soldiers arrive in her village to draft recruits. Mulan flees with his shield, horse, and blade to take her father’s spot, realizing that he has little hope of surviving. Mulan arrives at the boot camp, which is overseen by Commander Tung, a former Hua Zhou comrade. She eventually becomes a professional soldier under his tutelage, alongside scores of other inexperienced recruits, without revealing her real identity.

As the Khan’s army advances, Tung is forced to stop preparing and commit his division into battle. Mulan goes off on her own to pursue some soldiers, but she is met by Xianniang, who mocks her for pretending to be a male. She tries to kill Mulan, but her attacks are thwarted by the leather Mulan had wrapped around her chest to conceal her identity. Mulan takes off her male mask and returns to the fighting just as the Rourans launch a trebuchet assault on her fellow soldiers. Mulan manipulates the trebuchet into shooting on a snowy ridge, causing a landslide that burys the Rourans, using discarded helmets and her archery skills.

Mulan returns to camp and saves Chen Honghui, a soldier she had befriended there. She is dismissed from the army and continues her journey home, unable to conceal her true gender any longer. On her journey, she meets Xianniang, who admits that she, too, was shunned by her people and battles for Böri Khan only because no one else does. She also reveals that Khan’s attacks on the outposts were merely a distraction from his real plan, which is to trap and execute the Emperor for assassinating his father. Mulan returns to her battalion, risking execution, to alert them of the imminent capture. Tung agrees to trust her and sends a unit to the Emperor’s palace with her.

Xianniang impersonates the Imperial Chancellor with her sorcery and persuades the Emperor to accept Böri Khan’s invitation to single combat, while the city guards are removed from their posts. The guards are assassinated, and the Rourans plan to execute the Emperor by burning him alive. Mulan’s unit diverts the Rourans’ attention away from Mulan’s mission to rescue the Emperor. Khan attempts to snipe Mulan with an arrow, but Xianniang turns into a bird and kills herself by intercepting the arrow. Mulan kills Khan after disarming her and destroying her father’s sword. She sets the Emperor free, and he invites her to join his personal guard. She turns down the deal and returns to her hometown.

Mulan is reunited with her family for the first time. Mulan is presented with a new sword by an emissary from the Emperor, led by Commander Tung, who also makes a personal recommendation that she join the Emperor’s Guard.