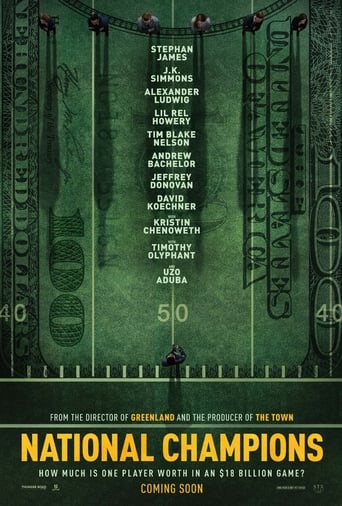 National Champions 2021 DVD Cover. A star quarterback ignites a players’ strike hours before the biggest game of the year in order to fight for fair compensation, equality, and respect for the athletes who put their bodies and health on the line for their schools.

With billions of dollars at risk and legacies on the line, the stakes could not be higher. Now, with only hours until kickoff, the head coach (J.K. Simmons) and various power brokers (Lil Rel Howery, Tim Blake Nelson, Andrew Bachelor, Jeffrey Donovan, David Koechner, Kristin Chenoweth, Timothy Olyphant, Uzo Aduba) must race against the clock to protect or destroy the prevailing collegiate athletics system.