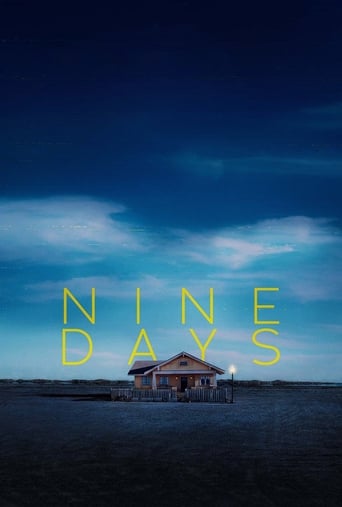 Nine Days 2021 DVD Cover. A reclusive man conducts a series of interviews with human souls for a chance to be born.

Will (Winston Duke) spends his days at a distant outpost viewing live Point of View (POV) on TVs of people going about their daily lives until one of the subjects dies, leaving a void for a new life on Earth. Several applicants – unborn souls — come to Will’s to undertake fitness tests, with the possibility of oblivion if they are found unfit.

Will, on the other hand, is quickly confronted with his own existential crisis in the shape of free-spirited Emma (Zazie Beetz), a candidate who stands out from the crowd, prompting him to go within and confront his own chaotic history. He discovers a daring new route ahead in his own life, fueled by surprising force.

After a string of critically acclaimed and award-winning short films and music videos, Japanese Brazilian director Edson Oda makes his feature film debut with a heartfelt and meditative vision of human souls in limbo, yearning to be born despite insurmountable odds, but hampered by forces beyond their control. ..