Paws of Fury The Legend of Hank 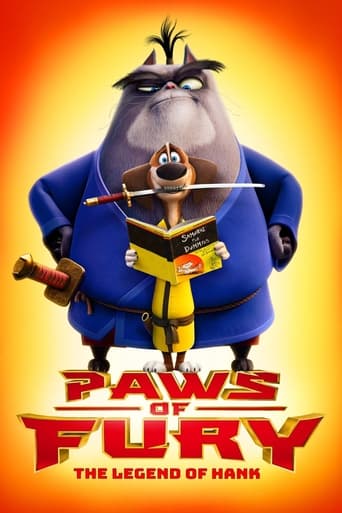 Paws of Fury The Legend of Hank 2022 DVD Cover – Summary

Paws of Fury The Legend of Hank 2022 DVD Cover. A hard-on-his-luck hound finds himself in a town full of cats in need of a hero to defend them from a ruthless villain’s wicked plot to wipe their village off the map. With help from a reluctant mentor, our underdog must assume the role of town samurai and team up with the villagers to save the day.

PAWS OF FURY: THE LEGEND OF HANK takes place in an animated universe reminiscent of Japan during the age of the samurai. Hank (voiced by Michael Cera) is a dog who naively travels to an all-cat village, where nefarious ruling cat Ika Chu (Ricky Gervais) assigns Hank to be the new samurai of Kakamucho.

Ika Chu’s hope is that Hank’s ineptitude will cause the destruction of the town. Unbeknownst to Ika Chu, the town is home to the retired, once-great samurai Jimbo (Samuel L. Jackson), who agrees to train Hank to pass a series of tests of cat-like agility to prove that he’s got what it takes to be a samurai (an honor typically bestowed on cats, not dogs).

The townsfolk are initially unwelcoming, but eventually, they warm to Hank. Young Emiko (Kylie Kuioka) even hopes that she, too, can become a samurai. But will Hank’s newfound skills be enough to defeat Ika Chu? An announced visit from the shogun (Mel Brooks) gives Hank a small window to be good enough to successfully defend Kakamucho.

Watch Paws of Fury The Legend of Hank Now