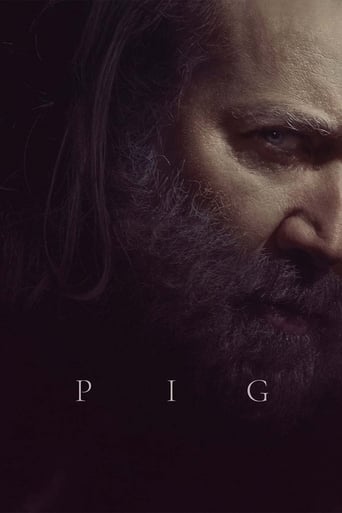 Pig 2021 DVD Cover. Having lived alone in the Oregon woods, a truffle hunter comes to Portland in order to track down the person who stole his prized pig, leading him on a cat-and-mouse chase down the coast.

Former Portland-based chef Robin “Rob” Feld has resorted to truffle foraging after the loss of his wife and business partner Lori fifteen years ago. He is a member of the International Truffle Foragers Association. He seeks truffles deep in the forests of Oregon with the help of his treasured foraging pig, which he raises only for this purpose. He begins delivering the truffles he and his pig have discovered to Amir, a young, inexperienced truffle merchant who has come across them. Rob is attacked by mysterious intruders one night, and his pig is taken from him as well.

He contacts Amir, who assists him in tracking down a group of drug addicts who are suspected of being the perpetrators by another local truffle hunter. They say they do not have the pig, but they make the implication that the individual who obtained it from them lives in downtown Portland. Rob and Amir join an underground fighting ring, where they are successful in extracting yet another clue as to the whereabouts of Rob’s pig, which they have been searching for.

When Amir and Rob wake up the next morning, he makes himself a breakfast and expresses his respect for Rob’s abilities as a chef; Amir’s parents’ marriage was troubled, but Amir recalls their parents being at their happiest following a dinner at Rob’s restaurant many years ago, before his mother eventually committed suicide. Amir agrees to make reservations for them at Eurydice, a prominent and stylish restaurant in the same neighborhood as Rob, following his example from the boxing ring. Rob, in the meantime, pays a visit to the house where he used to reside with Lori.

Rob visits Eurydice and demands a meeting with the restaurant’s head chef, Derrick, who used to work as a pasta cook at Rob’s restaurant. In response to Amir’s wealthy father, Darius, publicly criticizing Derrick for opening an upmarket restaurant rather than the traditional pub he always wanted to run, an emasculated Derrick confesses that Amir’s father, Darius, was behind the theft of his pig, which he had become aware of after being informed about it by Amir.

Rob terminates his partnership with Amir in an enraged manner before confronting Darius at his residence. When Rob comes for him again, Darius promises him $25,000 dollars in return for the pig, and he threatens him with the pig’s death if he doesn’t comply. After seeing his mother, who is really alive and in a coma, suggesting that her suicide attempt was a failure, Amir rushes to Darius’s house to pick up Rob, who has been missing since the incident.

Rob reveals to Amir that he does not truly require his pig in order to seek truffles, but that he simply enjoys having it around for company. He then begs Amir to assist him in relocating his pig in a different manner.

While Lori’s body is being kept in the mausoleum, Rob goes to the bakery where he used to work to get a loaf of bread, and Amir goes to the mausoleum to get a bottle of wine from Rob and Lori’s personal collection. The three of them gather in the kitchen after Rob and Amir had snuck back into Darius’s house and prepared the identical supper that Rob had prepared for Darius and his wife years ago for the three of them. Darius is moved to tears by the dinner, and he goes to his office thereafter.

When Rob inquires about the whereabouts of his pig, Darius regretfully informs him that the addicts he hired to transport it had mistreated it, resulting in its death; Rob is distraught.

In spite of everything, Rob decides to restart his relationship with Amir after being driven back to the cafe where he had initially picked him up by an apologetic Amir. When he gets back to his cabin, he puts on a tape that Lori had taped of herself singing to him for his birthday and plays it for him.