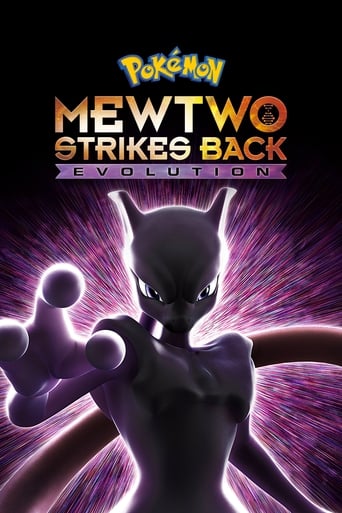 Pokemon Mewtwo Strikes Back Evolution 2019 DVD Cover. After accepting an invitation from a mysterious trainer, Ash, Misty and Brock meet Mewtwo, an artificially created Pokémon who wants to do battle.

Team Rocket has recruited Dr. Fiji to produce a weapon by replicating the Legendary Pokemon Mew in POKEMON: MEWTO STRIKES BACK — EVOLUTION.

When one of Mew’s eyelashes is used to clone, the result is Mewtwo, the “World’s Most Powerful Pokemon,” rather than a weapon. Mewtwo, enraged at being considered as nothing more than an experiment, destroys the New Island facility where he was formed and plans vengeance on humans.

The world’s strongest Pokemon trainer, Mewtwo, then invites Ash (Sarah Natochenny) and other trainers to New Island to face him. Mewtwo produces a large storm before leaving for the island, causing all ferry boats to cancel their excursions to New Island.

With the assistance of their Pokemon and a disguised Team Rocket, Ash, Brock, and Misty endure the storm and reach it to the island. Soon after arriving, Ash and his pals fight clones from Mewtwo’s army, and Mewtwo then extends his army to include Pikachu and other clones.

Now the Pokemon must fight their clones, and Ash must put his life on the line to put an end to the fighting and the cloning.