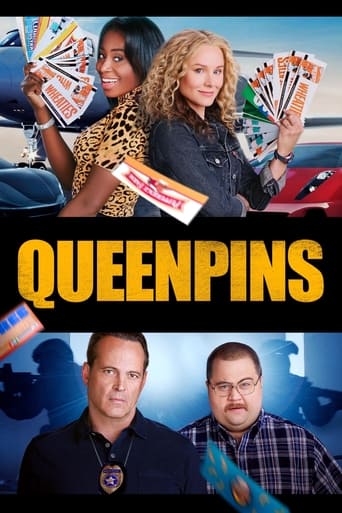 Queenpins 2021 DVD Cover. The movie is an absurd comedy about a boring suburban homemaker (Kristen Bell) and her best friend JoJo (Kirby Howell-Baptiste), a YouTuber with aspirations. An unlawful coupon club operation that steals millions from mega-corporations and gives bargains to thousands of fellow coupon clippers follows an apology and dozens of freebies from the corporation behind a stale box of cereal. On the trail of these newly crowned “Queenpins” of pink collar crime, a hapless Loss Prevention Officer (Paul Walter Hauser) from the local grocery chain joins up with a determined US Postal Inspector (Vince Vaughn).

QUEENPINS is an outlandish comedy based on a true tale about Connie (Kristen Bell), a bored and disgruntled suburban homemaker, and her best friend JoJo (Kirby Howell-Baptiste), a vlogger with dreams, who convert a hobby into a multi-million dollar counterfeit coupon scheme.

After sending a letter to the firm responsible for a stale box of cereal and obtaining an apology and dozens of freebies, the two concoct an illegal coupon club plan that defrauds mega-corporations and distributes bargains to legions of fellow coupon clippers.

A hapless Loss Prevention Officer (Paul Walter Hauser) from a local supermarket chain joins up with a determined US Postal Inspector (Vince Vaughn) in hot pursuit of these newly-minted “Queenpins” of pink collar crime on the quest to ultimate coupon dominance.