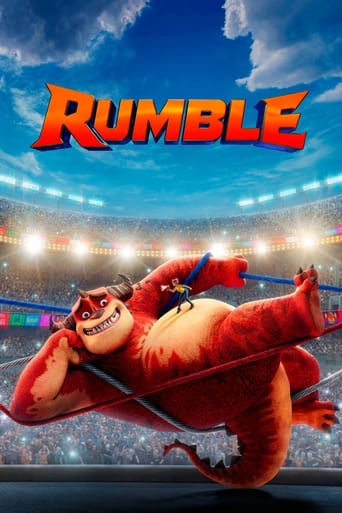 Rumble 2021 DVD Cover. In a world where monster wrestling is a global sport and monsters are superstar athletes, teenage Winnie seeks to follow in her father’s footsteps by coaching a loveable underdog monster into a champion.

In a place where giant monsters and humans collide, the monsters are superstar athletes and contend in a popular professional wrestling global sport called Monster Wrestling.

A young girl named Winnie seeks to follow in her father’s actions as an office manager by coaching a lovable underdog yet-inexperienced monster named Dorrie. Winnie plans to turn Steve into a champion in order to go up against the reigning champion Tentacular.

This website uses cookies to improve your experience while you navigate through the website. Out of these, the cookies that are categorized as necessary are stored on your browser as they are essential for the working of basic functionalities of the website. We also use third-party cookies that help us analyze and understand how you use this website. These cookies will be stored in your browser only with your consent. You also have the option to opt-out of these cookies. But opting out of some of these cookies may affect your browsing experience.
Necessary Always Enabled
Necessary cookies are absolutely essential for the website to function properly. This category only includes cookies that ensures basic functionalities and security features of the website. These cookies do not store any personal information.
Non-necessary
Any cookies that may not be particularly necessary for the website to function and is used specifically to collect user personal data via analytics, ads, other embedded contents are termed as non-necessary cookies. It is mandatory to procure user consent prior to running these cookies on your website.
SAVE & ACCEPT
Continue in browser
Cover Addict
To install tap Add to Home Screen
Add to Home Screen
Cover Addict
Get our web app. It won't take up space on your phone.
Install
See this post in...

For an optimized experience on mobile, add Cover Addict shortcut to your mobile device's home screen

1) Press the share button on your browser's menu bar