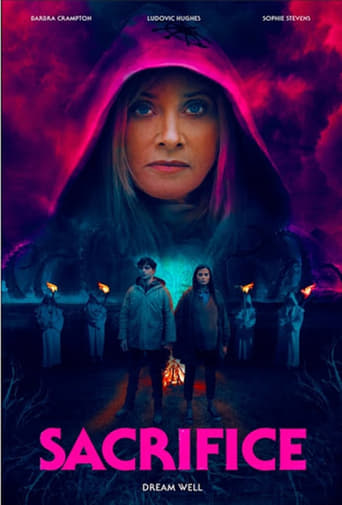 Isaac and his pregnant wife visit a remote Norwegian village to claim an unexpected inheritance. The couple finds themselves caught in a nightmare when they encounter a sinister cult that worships a sea-dwelling deity.

A woman washes blood from her hands at a sink. She wakes up her infant son and drive.

A few years pass, maybe 20 or so. A massive mountain dominates the scene. It’s not just any big mountain, but a big, intimidating mountain, according to the eerie, queasy lyrics.

The water is cut by a boat. It features Isaac (Ludovic Hughes) and Emma (Sophie Stevens). She chunders as she leans over the edge. Perhaps she overheard the nauseating music. More than likely, she’s sick, or she’s pregnant, which she is, and one of the most common things pregnant women in movies do is throw up, aside from screaming as people order her to PUSH!

In either case. Isaac and Emma arrive at the home, where the woman has washed the blood and awakened her son, among other items. The dried blood in the sink is still there. Isaac is the boy from the previous scene, and now that time has passed and he has become an adult, he has inherited the property.

The aim is to sell it, return to the United States, have a child, and never think of Norway again, unless they listen to Mayhem‘s De Mysteriis Dom Sathanas album. However, all of the eerie camera angles and off-putting musical cues they experience when visiting the house suggest that moving into and out of Norway quickly would be difficult.

They come across a photograph of Isaac, his mother, and his late father. Isaac laments, “I almost forgot what he looked like.”

At the local bar in this provincial area, Isaac makes friends with a couple of local dudes and gets stumbledrunk.

A knock at the door the next day. Renate (Crampton), the local policeman, answers the phone. She informs Isaac that his mother murdered his father, and that his blood is on the floor underneath Isaac’s bare feet. She then invites them to dinner, where she introduces them to her quiet local daughter Astrid (Johanna Adde Dahl) and describes how the locals worship The Slumbering One, a local folk god of local myth — aha!

Now we know why the locals always greet each other with “Sleep well,” knowing full well that it ain’t going to happen — and then she invites them to a local shindig she’s throwing tomorrow called something with a lot of umlauts and k’s in it.

Isaac is becoming more open to learning about Midsommar rituals and practices, and the ritual entails donning hoodie cloaks, saying “thee” an unsettling amount of times in loud and reverent tones (as in “O MIGHTY SLUMBERING ONE, I CALL TO THEE”), and being quasi-baptized in the freezing f—ing local fjord.

Emma isn’t having it, particularly with some of the seaweedy The Lighthouse vibes and Isaac’s sudden urge to remain in Norway and never return to the United States.

They fight a lot, and he goes out and drinks with the locals, acting erratically, and stands transfixed under the aurora borealis, watching Astrid emerge from the cold, cold water like a wraith, a wraith who isn’t even dressed at all. It’s starting to get weird around here, people. It’s very strange.

Is Sacrifice available to watch for free?

Yes, on The Roku Channel for free with ads.

Is Sacrifice available to watch for rent?