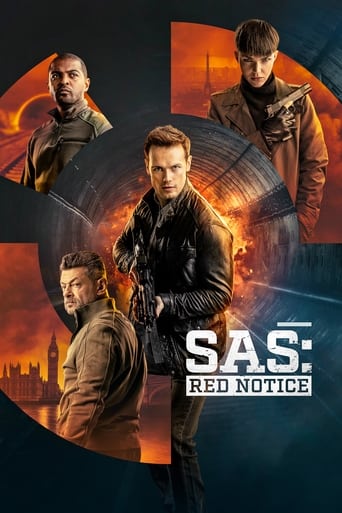 SAS Red Notice 2021 DVD Cover. Tom Buckingham, an off-duty SAS member, is tasked with foiling a terror assault on a train passing through the Channel Tunnel. As the battle aboard the train heats up, events in the halls of power take place that might determine whether Buckingham and the civilian passengers make it out alive.

Dr. Sophie Hart is being transported from London to Paris by Tom Buckingham, a special forces operator. Grace Lewis and her band of highly armed war criminals hijack their train deep within the Channel Tunnel and hold hundreds of people hostage. If Grace’s ransom demands are not satisfied, she threatens to disclose the British government’s deepest secrets and blow up the Channel Tunnel.

Tom is Sophie and the other passengers’ only hope of surviving, as he is unarmed and cut off from his counter-terrorist squad. SAS: RED NOTICE is a bold and realistic picture of an emergency response operation and the unique mindset Tom requires to live, based on the best-selling novel by former SAS operative Andy McNab.