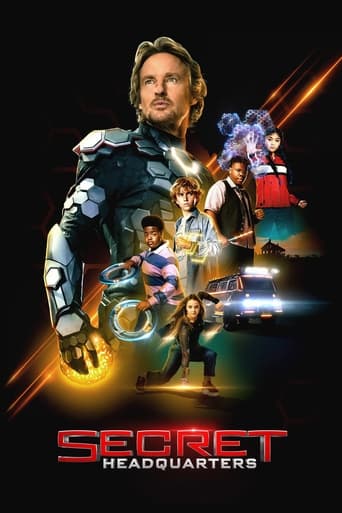 Secret Headquarters 2022 DVD Cover. While hanging out after school, Charlie and his friends discover the headquarters of the world’s most powerful superhero hidden beneath his home. When villains attack, they must team up to defend the headquarters and save the world.

Secret Headquarters opens with husband/father Jack Kincaid (Owen Wilson) witnessing what turns out to be a UFO crashing. The UFO was being tracked by a military officer (Jesse Williams), who was there watching when the mysterious object bestows Jack with supernatural abilities.

Ten years later, Jack’s 13-year-old son, Charlie (Walker Scobell), lives primarily with his mom (Jessie Mueller). When Jack unexpectedly has to bail on a weekend with him, Charlie invites three friends — best pal Berger (Keith L. Williams), classmate Lizzie (Abby James Witherspoon), and crush Maya (Momona Tamada) — over to his dad’s instead of going back to his mom’s as expected.

During their hang-out, the four teens discover a secret elevator that leads to an underground lair that’s filled with high-tech gadgets and super suits. They quickly realize that Jack is the peace-keeping, globe-trotting superhero known as The Guard.

The teens have fun playing with the gizmos and misguidedly use them (including illegally driving a souped-up Volkswagen Bus) above ground and at school, which catches the attention of a defense contractor CEO named Ansel Argon (Michael Peña) and his mercenaries. They pose a serious threat to the kids’ lives as they track down The Guard’s hideout and power source.