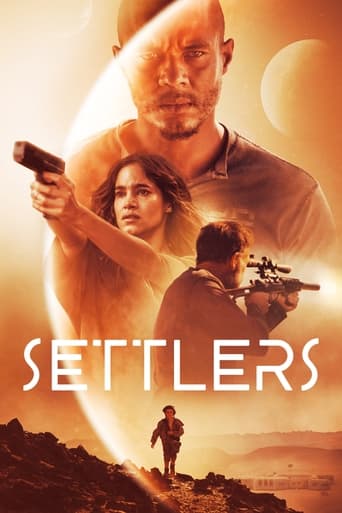 Settlers 2021 DVD Cover. Refugees from Earth, Remmy and her parents had found tranquility on Mars’ fringes until strangers emerge in the hills beyond their farm. The film, which is told in three parts, follows Remmy as she tries to survive in an unsettling environment.

A refugee family from Earth clings to hope for a brighter life on a lonely homestead near the Martian frontier.

However, when strangers appear in the surrounding hills and attempt to chase them away, Remmy (Brooklynn Prince, THE FLORIDA PROJECT) is confronted with the desperate reality that her mother (Sofia Boutella, THE MUMMY) and father (Jonny Lee Miller, TRAINSPOTTING) have worked so hard to keep hidden from her.