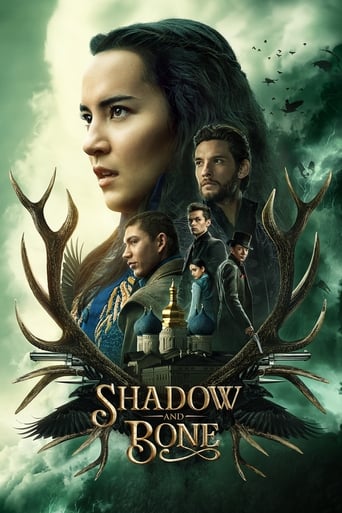 Shadow and Bone Season 1 DVD Cover. A teenage soldier discovers a force that could finally unite her nation in a world cleaved in two by a vast firewall of everlasting darkness. Dangerous powers scheme against her as she tries to hone her strength. Thugs, robbers, killers, and saints are at odds right now, and survival will require more than sorcery.

Alina Starkov and Malyen Oretsev are both orphans who grow up together and are inseparable companions, according to the first novel in the Grisha trilogy by Leigh Bardugo. They are also members of Ravka’s first army.

When Mal (Malyev) is assigned to a ship that can cross the Fold, a bleak, desolate strip of land populated by monsters that divides Ravka in two, Alina sneaks aboard, fearful of being separated from her mate. The monsters (Volcra) invade, and Alina uses a Grisha talent to save Mal. The Grisha are people who have the power to control nature and people. Alina turns out to have the power to conjure light, which is believed to be the stuff of folklore.

After verifying Alina’s force, General Kirigan, the commander of the second army, led by Grisha, rushes her to the capital to introduce her to the court and begin her preparation.

She has a hard time fitting in and embracing her current status as the country’s declared savior. But it’s Mal that she misses the most. She is duped into believing he has abandoned her; as the feeling of abandonment grows, so does her influence. She starts flirting with Kirigan, but she quickly discovers his dark history.

Her tutor Baghra reveals to her that Kirigan is the centuries-old Black Heretic who formed the Fold, and he plans to use it as a shield to conquer the world with her strength. She has no choice but to run, and when she does so, she comes across the crows, a small group of career criminals on a mission to abduct her. Since eluding them, she is eventually apprehended by Mal, who had been tracking her from the palace.

They plan to go further north in search of the legendary creature known as the magic stag from Alina’s recurring dream, one of the mythical creatures said to enhance the abilities of whoever kills it.

They eventually locate the deer, but Alina declines to slaughter it. Kirigan arrives, destroys the stag, and takes possession of Alina’s strength by fusing a fragment of its antler into her and a bone from it into himself.

They make their way back south and cross the Fold. The crows plan to cut their losses and return home after failing their job and discovering that Alina is much more valuable than all the money in the country.

They board the same ship that Alina, Mal, and Kirigan are on. As Kirigan extends the Fold, causing immense damage, Alina is compelled to defend the ship during the crossing.

Mal, who had stowed away on the ship, is discovered by the crows. They form an agreement to release Alina while also bringing down Kirigan. After a battle, Mal throws Kirigan overboard, where he is devoured by the Volcra. They all make the crossing after Alina prevents the Fold from spreading.

Since Alina and Mal are now the world’s most wanted criminals, the crows teach them street smarts. They all board a ship under fake names and plan their next course of action.