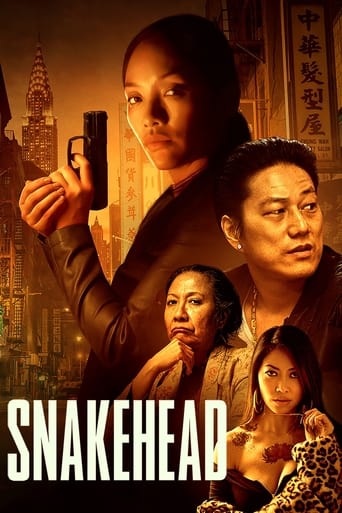 Snakehead 2021 DVD Cover. A Snakehead, a human smuggler, transports Sister Tse to New York. Despite the fact that she owes the crime family for her transportation, her survival instincts help her gain favor with the matriarch, and she soon rises through the ranks. Tse will soon have to reconcile her success with the reason she came to America in the first place: to find the kid who was snatched from her. Sister Tse will have to rely on the strength she discovered in changing her suffering into power in the end.

Tse flies to New York via human smuggler “Snakehead” in the hopes of reconciling with her only daughter Rosie after her prison term is commuted and she loses custody of her. Sister Tse, a Taiwanese immigrant, pays a smuggler $50,000 to get to New York. She goes straight to Dai Mah, a brother owner, who insists that she refund $57,000.

She needs to acquire favor with the crime family’s matriarch and fast ascend through the ranks because she doesn’t have much money. Her achievement, on the other hand, comes at a price. While working in a brothel, she will be subjected to brutal mistreatment by males throughout her stay in America. She heads to find Rosie after reimbursing Dai Mah, as well as beating up one of her customers and executing Dai Mah’s pimp. Rosie was later adopted by a New York couple, as she learns from Rosie herself.