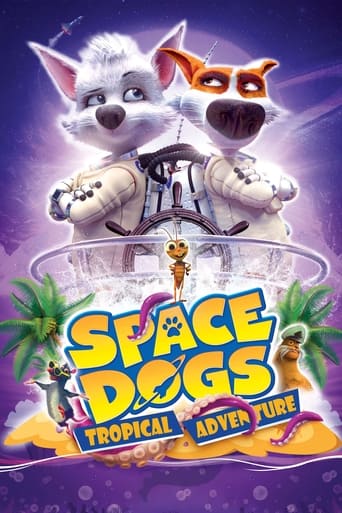 Space Dogs Tropical Adventure is the third film in the Space Dogs franchise, which is based on the legendary canines Belka (voiced by Maria Antonieta Monge) and Strelka from Soviet Russia (Mauriett Chayeb).

Belka and Strelka are returning to Earth after a trip to Saturn when their commanders send them to investigate a deadly whirlpool in the Atlantic Ocean off the coast of Cuba (Russia‘s ally) in this animated adventure with musical numbers.

They are kidnapped by jellyfish pirates, and the whirlpool seems to be sucking in the ocean, forcing the entire island to be evacuated.

When the dogs’ old mate, courageous rat Lenny, learns that Belka and Strelka have been sent to Cuba, he and his cockroach sidekick devise a plan to join them. After Lenny, Belka, and Strelka are reunited, the alien powers responsible for the whirlpool are confronted.