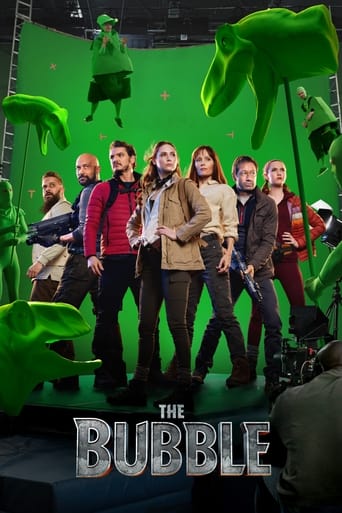 The Bubble 2022 DVD Cover. Sneaking out. Hooking up. Melting down. The cast and crew of a blockbuster action franchise attempt to shoot a sequel while quarantined at a posh hotel.

In THE BUBBLE, Hollywood is desperate for a blockbuster hit movie at the peak of the Covid pandemic and lockdown. With that in mind, the cast and crew of the latest movie in the Cliff Beasts franchise, Cliff Beasts 6, have arrived in the English countryside. There is Carol Cobb (Karen Gillan), returning to the franchise after her movie about Israelis and Palestinians uniting to fend off an alien invasion was a commercial and critical failure.

There is Darren (Fred Armisen), who is being given a chance to direct his first big-budget movie after attaining indie cred for shooting a movie with an iPhone 6 at his previous job at a home improvement megastore. A social media superstar (Iris Apatow) is brought in as a ploy to appeal to the youth market.

Bad method actors, aspiring cult leaders, and a Type A studio executive (Kate McKinnon) are determined to ensure that this movie is finished, no matter the mental and emotional breakdowns, hook-ups, drug hallucinations, and injuries that happen as the movie is being made. As the cast openly rebels against a quarantine that increasingly feels like they’re being held against their will, Darren must find a way to see his artistic vision through to completion.